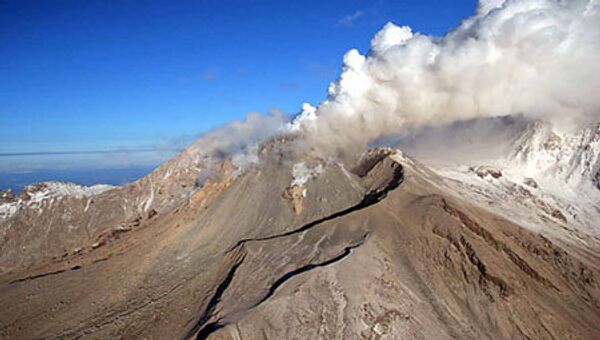 The northernmost active volcano in Russia's Far East Kamchatka Peninsula is currently spewing plumes of ash at a height of more than 6 kilometers (3.7 miles), the regional branch of the Russian Academy of Sciences Geophysical Service said on Sunday.

The 3,283-meter (10,771-foot) Shiveluch volcano on the Kamchatka Peninsula increased its volcanic activity in May 2009 and periodically spews ash from three to eight kilometers (1.9-5 miles). Scientists have registered more than 180 local earthquakes near the volcano.

Scientists have said the volcano does not pose any significant danger to villages in the area, the nearest one, Klyuchi, only 40 kilometers (around 25 miles), except for the possibility of some ash fall.

However, ensuing ash fallouts could be hazardous to health and the environment.

The eruption on the Eyjafjallajokull Glacier in Iceland, which began April 14, paralyzed air traffic throughout central and northern Europe, leaving thousands of travelers stranded and forcing more than 20 European countries to close their airspace.