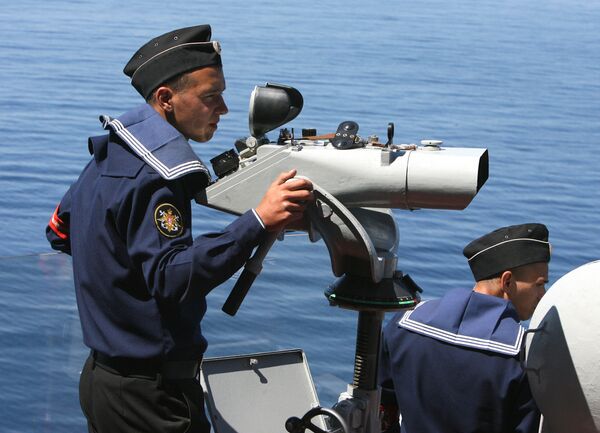 Construction of the Slava class Admiral Lobov cruiser was launched in 1984 at the Nikolayev shipyard in Ukraine but stalled in the late 1980s due to a sharp reduction in military expenditure.

The cruiser was renamed the Ukraina in 1992.

A Russian-Ukraine intergovernmental commission discussed the purchase of the Ukraina last week in Sevastopol, a major base for the Russian and Ukrainian navies.

"We agreed with the Ukrainian side that we will consider all variants of the ship's fate and present our proposals by the next meting in the fourth of the year," Vysotsky said.

A senior Russian Navy official told RIA Novosti the cruiser was only 50% complete and that the repairs and upgrade would cost up to 35 billion rubles.

He said that while this sum was enough to buy four Kilo class non-atomic submarines or four Steregushchy class corvettes for the Russian Navy, Moscow may still press ahead with the purchase as part of the wider campaign to reset relation with Kiev.

In late May, Russian President Dmitry Medvedev agreed with his Ukrainian counterpart Viktor Yanukovych that Russia will help Ukraine to finish the construction of the cruiser.

Slava class cruisers were designed as surface strike ships with some anti-aircraft and ASW capability. They carry 16 SS-N-12 Sandbox nuclear-capable supersonic anti-ship missiles, with launchers mounted in four pairs on either side of the superstructure.

Russia has three Slava class cruisers in service with its Navy.