Russia admits it needs to modernize its Navy 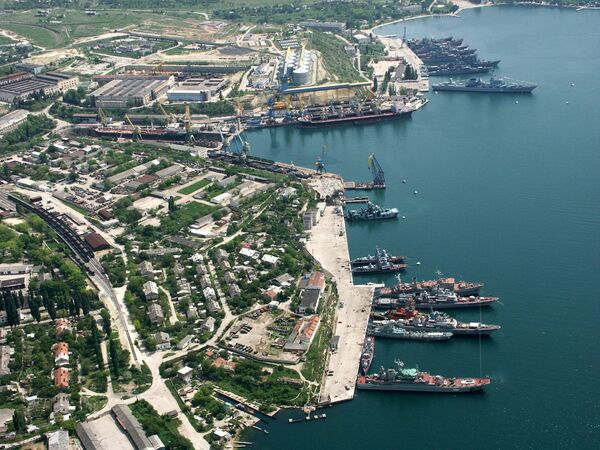 © RIA Novosti . Sergey Petrosyan
/
Go to the photo bank
Subscribe
Russia's reviewed plans for naval modernization include the supply of 15 new warships, including frigates, missile boats and submarines, to the Black Sea Fleet by 2020. The decision was recently made public by Navy Commander-in-Chief Admiral Vladimir Vysotsky.

Russia's reviewed plans for naval modernization include the supply of 15 new warships, including frigates, missile boats and submarines, to the Black Sea Fleet by 2020. The decision was recently made public by Navy Commander-in-Chief Admiral Vladimir Vysotsky.

Taking into account the high cost and complexity of the modern projects, the new ships will be modernized versions of already tried and tested projects.

The decision indicates that Russia's political and military leadership is dissatisfied with the speed and cost of building warships as part of new projects. Modernizing the Black Sea Fleet is also a priority because it is currently comprised of the country's oldest warships.

Analysts point out that this is the first decision on modernizing the fleet taken since Mikhail Gorbachev launched perestroika in the late 1980s.

The Black Sea Fleet has over 40 warships of different classes, many of which will be decommissioned by the early 2020s, and several dozen auxiliary vessels, which are also becoming obsolete. Moreover, it is said that only a half of these warships and vessels are in working order and combat ready.

So far it is not clear which ships and vessels will be built for the Black Sea Fleet, but some say the list includes three Project 636M submarines, three or four Project 11356 frigates and six Tornado class Project 21632 missile/artillery boats.

Russian shipyards can build large numbers of Project 11356 frigates and Project 636 submarines quickly, but the same is not true of the Tornado class missile boats. On the other hand, these missile boats will be modeled on the tried and tested Project 21630, which has a relatively simple design.

This scenario for modernizing the fleet could shorten the process and is set to cost about 100 billion rubles ($3.2 billion) by 2020. The ships and vessels to be commissioned by that time will form the basis for the fleet's subsequent strengthening as warships from new projects are added. If these plans are carried out, the Black Sea Fleet will comprise from 35 to 40 new warships with a maximum age of 10-12 years and a 30 year service life.

The Black Sea Fleet currently has two key tasks: to control the Black Sea and ensure the safety of Russia's southern borders, and deploy to the Mediterranean Sea and the Indian Ocean as needed.

If it is to be able to fulfill the former task, the fleet needs combat-ready missile boats, corvettes, small submarines as well as aircraft and coastal forces, including marines.

The latter task can be assigned only to long-range sea and ocean-faring groups, such as frigates accompanied by support ships.

Ideally, modernizing the Black Sea Fleet, and subsequently Russia's other fleets, will allow the country to maintain naval task groups capable of discharging a wide range of duties, from peacekeeping and humanitarian operations to combat roles in the key operational theaters around the world.

But it takes more than just political will and funding to realize these plans. Russia also needs to sign a new agreement with Ukraine because the existing documents concerning the Black Sea Fleet's status stipulate that Russia has to coordinate the modernization of the fleet and its coastal infrastructure with the Ukrainian authorities.

Such coordination will not be a problem as things stand currently in terms of politics, but the situation might change over time, so it would be reasonable to use this period of good relations with Ukraine to review the status of the Black Sea Fleet and expand Russia's rights.

The renewal of the Black Sea Fleet will be financed under the state rearmament program for 2010-2020, which is still being drafted. Officers of the Russian Defense Ministry say that its bottom-line funding, 13 trillion rubles ($419 billion), will not cover the modernization of the Navy, particularly such large groups as the Northern and Pacific Fleets, which require larger groups of more powerful and expensive warships than either the Black Sea or the Baltic Fleets.

Moreover, rearmament cannot be limited to spending on warships; its cost will increase dramatically given the need for a new naval infrastructure, landing vessels, naval aircraft and auxiliary ships, as well as support vessels and repair facilities. But without them any naval modernization would be incomplete and hence ineffective.