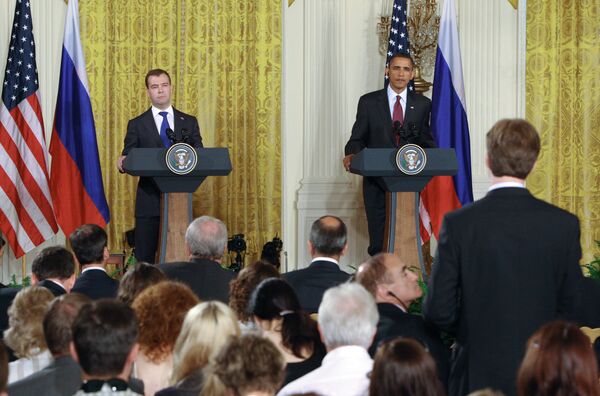 © POOL
/
Go to the mediabank
Subscribe
International
India
Africa
Russia and the United States pledged to continue their support of the economic development of Kyrgyzstan and will assist the Central Asian state in the fight against terrorism and drug-trafficking.

Russia and the United States pledged to continue their support of the economic development of Kyrgyzstan and will assist the Central Asian state in the fight against terrorism and drug-trafficking.

"We intend to continue our joint efforts with Kyrgyzstan, to combat threats from narcotics trafficking and terrorism and work together to promote economic development of a stable Kyrgyzstan," Russian President Dmitry Medvedev and his U.S. counterpart Barack Obama said in a joint statement following their meeting in Washington on Thursday.

Clashes between ethnic Kyrgyz and Uzbeks, who account for about 15% of Kyrgyzstan's population, broke out in the southern Kyrgyz city of Osh on June 11, lasting several days and spreading to nearby Jalalabad. The official death toll exceeds 260, but the actual death count could be ten times higher.

The situation in the region remains highly volatile, and the Parliamentary Assembly of the Organization for Security and Cooperation in Europe (OSCE) proposed on Wednesday sending international police to prevent the spread of violence in the Central Asian republic.

"The United States of America and the Russian Federation confirm their common interest in supporting the people of Kyrgyzstan in their efforts to restore democracy and stability after the April 7 events and tragic confrontations in the south of the country," the statement said.

"We call for the use of nonviolent political methods of resolving the current problems, for a rapid restoration of public order, civic peace and interethnic understanding," the document said.

The Kyrgyz interim government set June 27 as the date for a referendum on a new Constitution and people's support of the new authorities in the country.