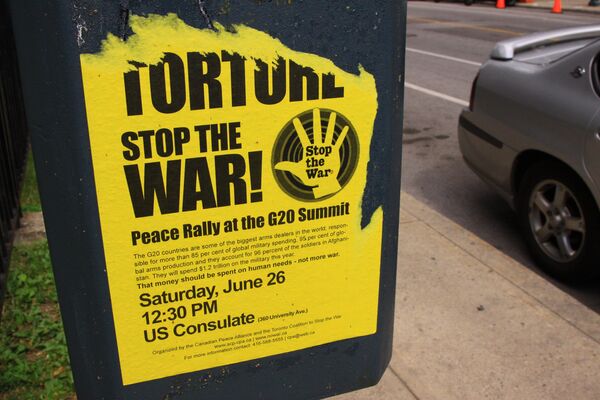 © RIA Novosti . Denis Voroshilov
Subscribe
International
India
Africa
A moderate earthquake which shook Canadian provinces of Ontario and Quebec will not affect preparations for the G20 summit to be held in Toronto this weekend.

A moderate earthquake which shook Canadian provinces of Ontario and Quebec will not affect preparations for the G20 summit to be held in Toronto this weekend, the city authorities said.

A magnitude 5.0 earthquake shook eastern Canada at 21:41 Moscow time [17:41 GMT] on Wednesday, just days before world leaders gather in Ontario for G8 and G20 summits, the U.S. Geological Survey reported. Some buildings in Ottawa and Toronto were evacuated following the tremors but there were no reports of major damage or casualties.

Kevin Sack, director of communication for the city, was aired by the CBC TV channel as saying that his department urgently checked the main communications and buildings in the city and found out that this "quite weak, moderate earthquake" and detected no damage which might affect the city's preparations for the summit.

"The Toronto Transit Commission and Transportation Services have reported that there has been no damage to their infrastructure or interruptions to service," he was quoted as saying by the BNO news.

"The City's Emergency Operations Center is up and running in preparation for the G20 so the City is uniquely prepared to respond to the event. We will continue to monitor the situation and will report as necessary," he added.

The Wednesday's quake epicenter was 19 km (12 miles) below ground, 60 km (37 miles) to the north of Ottawa, the Canadian capital.

The quake was also felt in Huntsville, Ontario which is to host the G8 summit on Friday.

CBC reports that although Canada averages three or four tremors a day, most are only detectable by seismological equipment. However, Canadians do feel the earth move a few times a year.