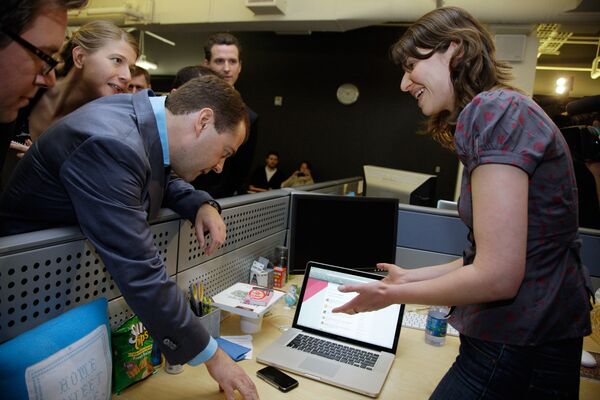 © POOL
/
Go to the mediabank
Subscribe
International
India
Africa
Russian President Dmitry Medvedev opened an official Twitter account during his visit to the hub of the micro-blog company in California's Silicon Valley on Wednesday.

Russian President Dmitry Medvedev opened an official Twitter account during his visit to the hub of the micro-blog company in California's Silicon Valley on Wednesday.

Medvedev registered KremlinRussia for Russian and KremlinRussia_e for English language tweets. He inspected the company's office and sent his first tweet in Russian, saying "hi everyone, I'm on Twitter now and this is my first message."

A second tweet followed, in which the Russian president said he was going to visit the Apple, Yandex and Cisco offices while in California.

The Russian president is on a three-day official visit to the United States that began with a dinner with California Governor Arnold Schwarzenegger and ends on Thursday after talks with President Barack Obama in Washington.

Twitter is a social-networking service that lets people keep each other informed about what they are doing throughout the day.

Medvedev, who portrays himself as a young and technologically savvy leader, has a blog on LiveJournal and an account on YouTube.

Obama, whose presidential campaign broke new ground with its use of the Internet, was one of the first heads of state to have Twitter and Facebook accounts.