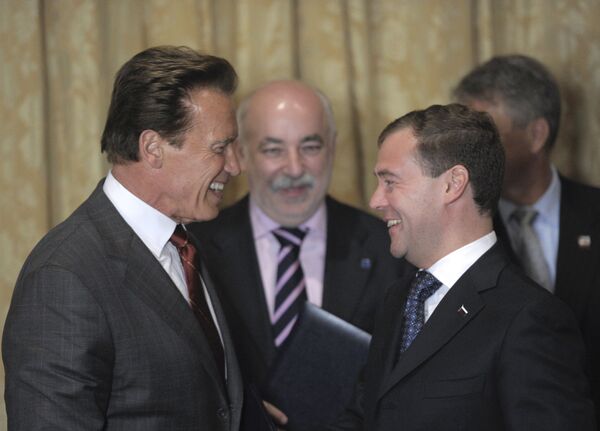 Russian President Dmitry Medvedev kicked off his five-day visit to the United States with dinner with California Governor Arnold Schwarzenegger in San Francisco.

Schwarzenegger said that the city of San Francisco was honored that Medvedev had begun his visit there.

Medvedev said he had chosen to start his tour in the city because the state of California is "one of the most economically developed states."

The Russian president has made developing the hi-tech sector and encouraging research the focal point of his economic agenda and plans to use his trip to the United States to learn more about the industry.

"There will be a serious program tomorrow: I will inspect the hi-tech companies in Silicon Valley. This is very useful for us given our plans for a similar center near Moscow," Medvedev told the Californian governor.

Russia is building from scratch a hi-tech research hub in Moscow suburb Skolkovo, which many have dubbed Russia's Silicon Valley.

"I don't just want to see what is going on there; it is not an excursion. I would like to see the establishment of fully-fledged relations as a result of this trip."

Medvedev said it would be productive for the two countries to cooperate in the hi-tech sphere and supports the idea of creating a Russian-U.S. working group for sharing experience in the field.

Medvedev will visit Apple, Google, Twitter and Cisco during his tour of Silicon Valley.

"I am glad that I will be able to fly to Washington [DC] to hold highly interesting talks with President Barack Obama after having been enriched by the experience in California," the Russian president said.