Russia and the XXI Century Geopolitical Challenges. On the Eve of President D. Medvedev's Visit to the US (I) 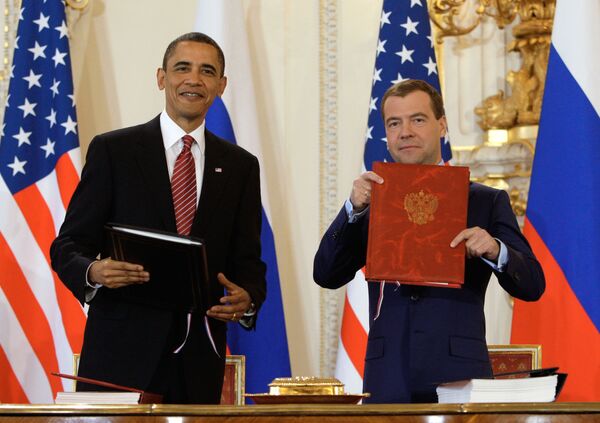 Russia gained enormous foreign-politics experience across the world in the imperial epoch and in the Soviet era. Assessing the Russian-US relations over the past year from the standpoint of this experience, one readily concludes that the highlight for the period of time has been Washington's generous offer to press the reset button. No doubt, there are profound reasons why the US wants its relations with Russia reset.

Russia gained enormous foreign-politics experience across the world in the imperial epoch and in the Soviet era. Assessing the Russian-US relations over the past year from the standpoint of this experience, one readily concludes that the highlight for the period of time has been Washington's generous offer to press the reset button. No doubt, there are profound reasons why the US wants its relations with Russia reset.

After September 11, 2001 Washington's foreign politics was entirely dominated by the vision of a unipolar world. The US political establishment was convinced that Russia had lost the Cold War but was nevertheless treated gently considering that no effective ruler like Gen. D. MacArthur was installed to act as its vice-king. The majority of the US politicians including all of G. Bush's Administration were under the impression that the Kremlin's reaction to the situation was that of ingratitude and that Russia's political course was both unlogical and unacceptable. Like the Roman emperors who could not agree to king of Armenia Mithridates' claiming his own sphere of influence, Washington could not accept the aspirations of the post-Soviet Russia.

At that moment, Washington's priority was to demonstrate to both Russia and Serbia that it was the US who had the final say in the Balkan affairs, and eventually not only the Kremlin but also the rest of the world were forced to realize to what extent this was the case. In 2006, C. Rice bluntly interrupted Russian diplomacy chief S. Lavrov at the hearings in the Council on Foreign Relations by saying she had already told him the problems related to the territories west of the Danube were not to be discussed.

Why was Washington so outraged by Russia's resolute response to the Georgian aggression against South Ossetia and the killing of Russian peace-keepers? The reason was that for the US Georgia's President M. Saakashvili was the number one partner in the Caucasus, and Moscow's dealing him a blow called into question the widening of the US hegemony.

As a result, the situation during the last six months of G. Bush's presidency resembled that of the second half of 1983 when the S. Korean Boeing drama prompted an outpouring of emotions in Moscow and Washington  and the dialog between the USSR and the US had to be completely suspended. It did not evade watchers that in 2008 the US reaction was in part shaped by the affectivity of C. Rice who perceived the August developments in the Caucasus as her personal diplomatic defeat.

From a broader perspective, the US “righteous indignation” was due to the fact that, leveling as much criticism at Russia as it wished to, it clearly lacked the potential to actually influence Moscow without harming Washington's own interests. Quite a few forces in today's world would be happy to see the US and Russia clash, and in the light of the fact the new US Administration's pledge to reset the relations with Moscow gives a cause for cautious optimism.

At the same time, one should keep in mind that the US founding fathers with all their internal disagreements invariably shared the view that they had invented a superior form of statehood and that it was their mission to spread it across the world, converting peoples to their political faith or – if necessary – helping peoples displace their rulers if they stood in the way. Even nowadays, the essentially messianic notion, which is clearly rooted in protestantism, remains the underlying philosophy of the US international politics.

Unlike philosophy, the political tactic has to be based on compromises, and the Kremlin is ready to embrace those in various spheres. Strictly speaking, Russia's presidents were markedly open to compromise throughout the post-Soviet epoch, while the US position used to be asymmetric.

The advent of the new US Administration revived hopes that serious compromises can be reached, but the first and extremely important step must be to set fair and transparent rules of the game. Russian President D. Medvedev is calling for a new European Security Pact as the mechanisms built in the framework of the once useful Helsinki Accords no longer guarantee the same level of security to all European countries.

Recently, Russia and the US penned the new Strategic Arms Reduction Treaty. In the context, though Moscow had to state unilaterally that this treaty is contingent upon the United States' not building up its missile defense to the level at which Russia's nuclear deterrent might be eroded. Russia is offered to join the US-led collective missile defense system, but at the moment the plan appears to be an equation with many unknowns. While the benefits of joining in are obvious, Moscow should make sure that Russia's own defense research will not be constrained under the arrangement. Another dimension of the problem is that Russia – in the case of its integration into the European missile defense initiative - has to avoid being dragged into the ongoing conflict between the US and the countries Washington regards as sources of threat to the US and its allies. In other words, Russia can cooperate with NATO, but not at the cost of alienating Iran, Syria, or N. Korea.

The Kremlin is carefully monitoring the evolution of NATO. It should be remembered, however, that in 1904 Russian Emperor Nicholas II said: “There will be no war with Japan because I don't want it and Japan will not dare to wage it”. Peaceful intentions are not necessarily forever, while the NATO military potential got a boost over the past years which saw the infrastructures of the alliance inch towards Russia's borders.

On May 17, 2010 a group of experts chaired by M. Albright unveiled NATO's rather contradictory new strategic concept. Admitting that NATO authority and resources are limited, the document nevertheless contains proposals for widening the alliance's responsibility zone. First, Russia cannot agree to NATO's taking the role of a global gendarme or the Orwellian Big Brother. Secondly, Moscow holds that NATO has already reached its natural confines in the expansion process. Over the recent years, novices have been injecting into NATO their political problems and conflicts rather than brining to it new military capabilities, thus confronting the bloc with the indigestion problem. Currently the countries bracketed together in NATO fall into several asynchronous factions with diverging interests. Thirdly, Moscow is unhappy about NATO's tendency to permanently sideline the UN as it did in Yugoslavia in 1999. We are witnessing attempts to create a parallel global governance body along with defamation campaigns targeting the UN which has deserved its status in the international politics. The latter tendency becomes particularly visible in the context of the raising World War II revisionism. For Russia, the recurrent attempts to equate Germany and the USSR in terms of the responsibility for the outbreak of World War II are absolutely inadmissible. They disguise the plan to discount Russia as a global political player. It is true that the configuration established by the Yalta and Potsdam conferences no longer exists in its original form, but its key structural elements – the UN with its institutions, the system of international law based on the UN Charter upholding the principles of sovereignty and non-interference, the UN Security Council with veto-wielding permanent members – are still there. Currently the world has no alternative platform for global dialog and peaceful resolution of conflicts.