Presidential elections in Poland: a new brother or a new course? 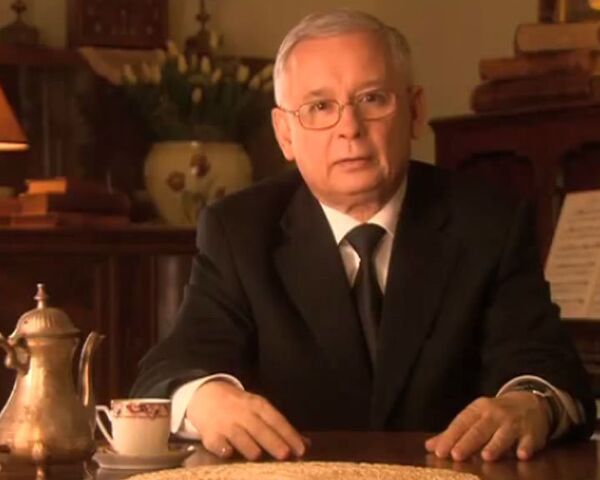 © KaczynskidoRosjan
Subscribe
International
India
Africa
On Sunday, June 20, Poland will elect a new president. Of the ten candidates, only two are serious: acting President and Marshal of the Sejm (Speaker of Parliament) Bronislaw Komorowski and former prime minister and leader of the conservative Law and Justice Party Jaroslaw Kaczynski.

On Sunday, June 20, Poland will elect a new president. Of the ten candidates, only two are serious: acting President and Marshal of the Sejm (Speaker of Parliament) Bronislaw Komorowski and former prime minister and leader of the conservative Law and Justice Party Jaroslaw Kaczynski.

It is unlikely that any of the candidates will receive the necessary 50% or more of the vote, which means there will be a runoff on the fourth of July, which Komorowski is favored to win.

Early elections were scheduled after the April 10 disaster near Smolensk, in which Jaroslaw Kaczynski's twin brother Lech died. The elections are also taking place against the backdrop of the flooding that has still not subsided in the Republic of Poland. These circumstances have meant that the country's presidential elections have attracted considerably more attention than normal from Russia, the EU and the United States. In Poland, the president has a considerable amount of executive authority, but not as much as in, say, France or the United States. After all, Poland is a parliamentary republic, not a presidential one.

Poland's presidential elections are not just about picking a new head of state and redressing the familial bias in Polish politics - the Kaczynski twins, both together and apart, have done much that is best left unmentioned after the Lech's funeral. The situation is much more serious for the Polish people. They have to look inside themselves and decide nothing less important than what kind of role Poland should play in Europe, how the country will relate to its neighbors (Russia, first of all), who will decide all this, and when there will be political stability in the country, particularly at the upper echelons. This is considerably more than a political plebiscite for a new president; it is a matter of building a new state.

In order to understand what this means, we need to go back to the time of the second catastrophe at Katyn, on April 10, 2010. Poland was never known for its political stability, but when the Civic Platform Party won the 2007 elections and its leader Donald Tusk became prime minister, the country literally began sliding towards a diarchy. A tug-of-war over authority ensued between Tusk and Lech Kaczynski, who became the president in 2005.

According to the Polish constitution, the president, along with parliament, is responsible for foreign policy and defense, and can exert considerable influence in these areas if he so desires. He even has the power to veto any laws. Overriding a veto requires a three-fifths parliamentary majority, which is difficult for any parliament to achieve. Under Kaczynski the Younger - the late president was 45 minutes younger than his twin brother - many of Tusk's initiatives were scuttled in this way. Tusk was often unable to force very necessary reforms for Poland past Kaczynski, and had already resigned himself to the fact that he would have to wait until the election of a new president. Only then could there be a major restructuring of health care, the economy, finances and the country's regulatory framework.

The situation led Tusk to announce openly in the fall of 2009 that he intended to review the Polish constitution. He talked about introducing amendments that would more clearly delineate some powers "to the executive branch," which would give the prime minister greater authority. Tusk has also assumed responsibility for Poland's foreign policy since 2008. He promised to withdraw Polish troops from Iraq and rescind Polish objections to Russia's bid for accession to the Organization for Economic Co-operation and Development (OECD). This by no means signifies that Tusk is all that pro-Russian or that President Bronislaw Komorowski would be the same way - if, of course, he is elected. And it also does not mean that Russian-Polish relations would be as rosy as can be under their government. It only means that Tusk's party has begun to adopt a more realpolitik stance towards Poland's relations with Russia. Both he and Komorowski think that improving relations with Russia is a natural direction for Polish foreign policy for the simple reason that Poland represents a natural regional bridge between East and West in Europe, and is indeed destined to normalize relations with Germany (which it has already done) and Russia. This, among other things, will elevate Warsaw's regional significance, which is another one of its goals. Not to mention the economic benefits of trade between East and West passing through Poland.

Tusk and Komorowski belong to the same party, so logically the latter's election would create a strong, consolidated power base, the likes of which Poland has not seen in its short democratic history. A new suit will have to be made for the new leadership - a tailor-made one.

Incidentally, Polish officials hope that one of the first things Poland will do after this reconfiguration of power will be to finally sign a new agreement with Moscow on Russian natural gas supplies. In fact, everything for this agreement has already been decided. According to the draft, the Russian company Gazprom will supply slightly more than ten billion cubic meters of gas per year (Poland's total consumption is 14 billion cubic meters) until 2037. Signing the agreement has been delayed due to criticism from the opposition and the same old arguments in the executive branch. The Polish Ministry of Economy has already announced that if the agreement is not officially signed and ratified in the next few months, there could be gas shortages in the country by October, the economic damages of which would be worse than the floods in May and June of this year. Flood damages have reached more than $2 billion, according to preliminary estimates.

Gazprom currently owns a 48% stake in the Polish company Europolgaz, which operates the Polish segment of the Yamal-Europe gas pipeline. Gazprom has negotiated an agreement to increase its stake, which the opposition does not want. Since the new president would be from the same party as the prime minister, there would be no need to fear the presidential veto.

According to the latest public opinion polls, Bronislaw Komorowski could get as much as 46% of the vote on June 20, while Jaroslaw Kaczynski could receive between 31% and 36%.