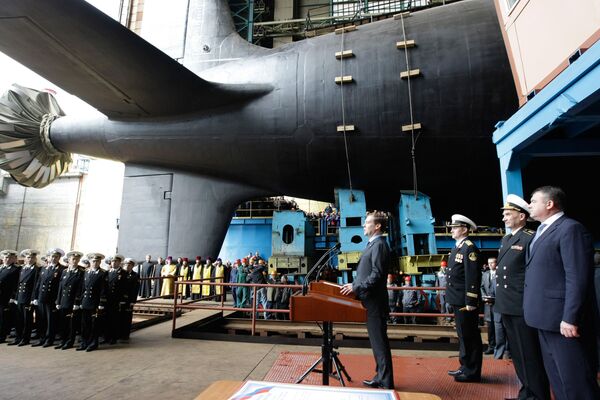 The fourth-generation ballistic missile submarine, the Severodvinsk, finally departed the Sevmash shipyard in northern Russia on June 15. The boat has been under construction since 1993.

The fourth-generation ballistic missile submarine, the Severodvinsk, finally departed the Sevmash shipyard in northern Russia on June 15. The boat has been under construction since 1993. This project, with its epic delays, reflects the problems Russia's entire defense sector has been facing for twenty-odd years.

Soviet designers began work on its fourth-generation submarines in 1977, and they were added to the rearmament program in 1985. According to Soviet tradition, plans were made to build several classes of nuclear submarine at the same time -- strategic, anti-air, multipurpose, anti-submarine and special-use. When it became clear by the end of the 1980s that this would dramatically increase the navy's spending, a decision was made to limit the naval rearmament project to two classes of submarines -- strategic nuclear deterrence submarines and multipurpose submarines.

Project 955 was chosen for strategic deterrence and the first boat, the Yury Dolgoruky, was launched in 2007. Project 885 was selected for multipurpose boats.

The first Project 885 submarine, which was slated to launch in the early 1990s, was postponed until 1993 due to lack of funding and then the collapse of the Soviet Union in 1991. When the project got back on track, the launch date for the first boat was initially set for 1998. It was rumored that perhaps two or three other boats of that class would follow. But the launch date was pushed back twice more, first until the early 2000s and then until 2007.

But it wasn't until 2010 that the first Project 885 Yasen (Graney) class submarine was finally launched, and it will be put on combat duty in 2011 at the earliest.

Unlike the Yury Dolgoruky, which has not been armed with Bulava missiles yet, the Severodvinsk will soon be equipped with existing missiles and torpedoes.

It turns out the claim that several more boats of this class were laid down in the 1990s was just a rumor. Work on the second upgraded boat of this class, the Kazan, began only in 2009.

There are several reasons for the delay in construction, including lack of funding and the need to modernize the boat's equipment, which was designed in the late 1980s. There has also been talk that the next-generation power unit was in need of adjustment.

Some even argued in the mid-2000s that there was no need for this class of boats. The Severodvinsk is a large submarine with a displacement of 9,700 tons when surfaced and 13,500 tons when submerged. It measures 120 meters in length, with a beam of 13 meters and a maximum speed of 31-35 knots when submerged.

Graney class nuclear submarines have eight 533 mm and 650 mm torpedo launchers and 24 silos for launching a variety of nuclear-tipped cruise missiles with a range of up to 5,000 km (3,100 miles), which are effective against submarines, surface warships and land-based targets.

The $2 billion boat has powerful electronic and sonar equipment. Its closest rival is the SSN21 Seawolf, a large, high-speed and heavily armed boat designed during the Cold War to maintain the United States' acoustic advantage over Soviet Project 971 submarines in the late 1980s. The United States planned to build 30 expensive Seawolf boats.

With the end of the Cold War, the cost of these submarines was deemed prohibitive (the three completed boats cost $4 billion each) and the program was scrapped in favor of new Virginia class attack submarines, which are smaller and cheaper. The United States plans to build 30 Virginia class boats to replace its Los Angeles class fleet.

One has to wonder if Russia needs to build boats comparable to the Seawolf; the Yasen boats were designed for a potential war against the world's most powerful navy. Perhaps Russia should limit itself to two or three Project 885 submarines and then shift its focus to a cheaper boat that would have comparable power thanks to modern equipment and weapons.

Even if Russia builds the six Severodvinsk class boats it has planned, they will not replace the existing fleet of multipurpose submarines. The Russian navy currently has 27 nuclear submarines from projects 949, 945, 671RTM and 971, which were launched between the mid-1980s and the late 1990s. At least half of them will be decommissioned within 15 years.

Therefore, it would be advisable to build 12-15 cheaper boats whose specifications will roughly correspond to the latest Project 971 or even Project 671RTM submarines, but which will have better equipment and a lower noise level.