Russian military may have to import armor plate (update) 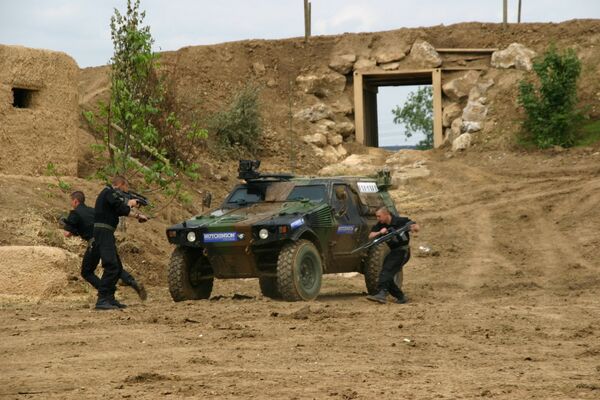 © RIA Novosti . Sergei Safronov, Vladimir Dobrovolskiy
Subscribe
The Russian Defense Ministry will wait for an answer from experts before it decides whether to buy foreign technology for the production of armor for light military vehicles, a senior military official said Tuesday.

The Russian Defense Ministry will wait for an answer from experts before it decides whether to buy foreign technology for the production of armor for light military vehicles, a senior military official said Tuesday.

"The decision on the purchase of light armor or its production technology [abroad] has not been made yet," Deputy Defense Minister for Arms Procurements Vladimir Popovkin said at the Eurosatory-2010 arms show in Paris.

"Our research centers have not given us an answer as to whether they are ready and capable of producing this type of armor. If they are, we will make our own armor, but if they are not, we will find ways to acquire Western technology for production in Russia," Popovkin said.

Russian Defense Minister Anatoly Serdyukov has said that Russia may purchase light armor or technology for its production from Germany.

According to experts, Russia is 20-30 years behind the West in many areas of military technological progress and has recently moved to close the gap by purchasing production licenses abroad.

Serdyukov was quoted as saying in late May Russia planned to set up the production of Italian armored vehicles - Iveco manufactured Light Multi-role Vehicles (LMV).

He said an assembly line could be set up "in three to four months" with imported components, but that it would take several years for production to be fully localized, adding Russia had already bought at least two LMVs for "testing purposes."

A source at the KamAZ automaker confirmed talks were underway on LMV assembly under license at Naberezhnye Chelny, where the Russian plant is based.

Italian LMVs have been used in Iraq, Afghanistan and other NATO missions abroad, where their performance has been praised.