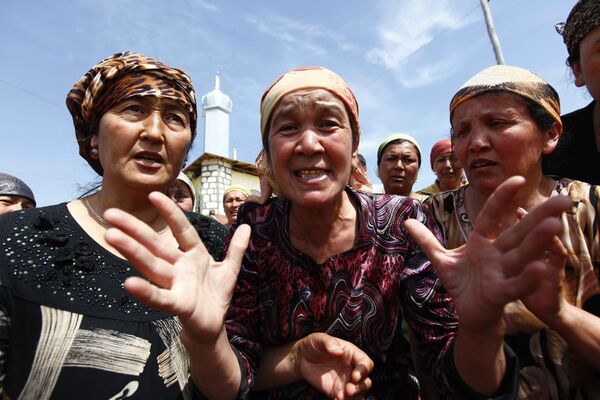 At least 114 people were killed in clashes between ethnic Kyrgyz and Uzbeks in the southern Kyrgyz cities of Osh and Jalal-Abad.

At least 114 people were killed in clashes between ethnic Kyrgyz and Uzbeks in the southern Kyrgyz cities of Osh and Jalal-Abad, the AKIpress agency said on Sunday citing a health ministry report.

At least 1,558 residents of the two southern cities were injured during the three-day violence. The agency said situation in Osh remains "generally tense," while Jalal-Abad is "on fire."

PAUSE DUE TO RAIN IN JALAL-ABAD

On Saturday clashes spread from Osh to Jalal-Abad and the state of emergency was also introduced in the southern city. Shots were heard in the city over the weekend, and there were reports of youth gangs setting houses on fire.

All shops and markets are closed, no public transport is available. Firemen, who were called to extinguish numerous fires which broke out in the city, were escorted by special police units.

But the situation improved a bit after a strong rain and hail.

"A strongest rain and hail, which started in Jalal-Abad, extinguished buildings, which had been set ablaze. Many people also disappeared from the streets. Shots are heard but not as often as before," an eyewitness told RIA Novosti.

The gzt.ru news portal said Uzbeks blocked the highway leading from Osh to the capital Bishkek.

According to local media reports, a nephew of the deposed Kyrgyz president Kurmanbek Bakiyev was spotted while giving firearms to crowds in the street. The Bakiyev clan enjoys strong support in the southern regions of the country.

As of 18:00 local time, several well-armed groups acted in the city. An eyewitness told Russia's Business FM radio station that "black off-road vehicles," from which both Uzbeks and Kyrgyz people are being shot in the streets, were spotted in the city.

"There are two big bazaars here and they were set alight, I could even see the flames from my flat. Shops have been looted and gangs have occupied the streets," a Pakistani student living in Osh told BBC.

There are also reports of cars with loudspeakers, which call on to join the "jihad."

An Uzbek eyewitness told BBC that Uzbek districts of Osh were looted by Kyrgyz gangs.

"They have been knocking on our neighbours' doors asking where the Uzbeks live. Our neighbours have told them we have all left," a woman reported from Osh.

On Saturday the republic's authorities said that more police and military forces are needed to return the situation in the south back to normal. But Interim governor of the Jalal-Abad region Bektur Asanov said on Sunday the authorities were set to start a "harsh offense."

"We have enough people... good reinforcements arrived," he said.

The Kyrgyz interim government has issued a decree allowing the Defense Ministry to call up reservists aged under 50 to stabilize the situation on Sunday.

The mobilization is aimed at ensuring the security of citizens and protecting the constitutional order in the south of Kyrgyzstan to normalize the situation as quickly as possible and restore law and order, the press office said.

Kyrgyz interim government allowed police and the troops to shoot to kill in order to quench the riots and stop marauders.

Officials from the Collective Security Treaty Organization (CSTO) are set to gather on Monday to discuss the ways to resolve the crisis in Kyrgyzstan, including possible deployment of a peacekeeping contingent to the violence-hit Kyrgyzstan.

Participants in the talks, which will involve Kyrgyz representatives, will discuss the "possibility of using procedures and mechanisms envisaged by the CSTO charter" to resolve the conflict, a spokeswoman for the Russian president said.

Meanwhile, the head of the interim government signed a decree on Sunday according to which law enforcers who refused to abide by orders, will be sacked without the possibility of reinstatement.

"There are reports that certain law-enforcers fail to fulfill [tasks], to obey orders and demands of the superintendents of areas in the state of emergency," the decree says.

According to official reports, five police officers were killed and 11 injured in the violence-hit areas.

Kyrgyz and Uzbek ethnic leaders in Kyrgyzstan agreed on Sunday to begin reconciliation talks following days of ethnic violence that claimed the lives of about 100 people, the president of Kyrgyz public fund Otkrytaya Positsiya said.

"Reports from the city of Osh said that informal Kyrgyz and Uzbek ethnic leaders in Osh's south-east agreed to begin talks... aimed at reestablishing peace [in the area]," Dmitry Kabak said.

More than 75,000 refugees have fled to Uzbekistan from Kyrgyzstan following the unrest.

Meanwhile, the Organization of Islamic Conference called on the Kyrgyz law enforcement structures to restore order as soon as possible, and the population to "reject inter-ethnic clashes and violence, show maximum restraint and return to the peaceful life within the framework of the law and order."

Though no violence was reported near the capital Bishkek, the Russian Defense Ministry sent on Sunday an additional unit of 150 paratroopers to enhance security at its airbase in Kyrgyzstan.

The paratroopers are to provide security to Russian soldiers serving at the Kant base, some 20 kilometers (12 miles) outside the capital, Bishkek, and their families, Alexei Kuznetsov said.

He said the troops are also ordered to reinforce security at other Russian Defense Ministry's facilities in Kyrgyzstan.

The Kyrgyz interim authorities asked Russia for military help to stop the rioters, but Moscow refused on Saturday.

A spokesman for the U.S. Manas air base, at Bishkek's international airport, told the media on Sunday that the base was still used to deliver cargo and soldiers to Afghanistan, the Vesti.ru website said.

He also said that U.S. troops in Kyrgyzstan discuss ways of delivering food and medicines to the violence-hit south, but the information was not confirmed by the Pengagon.