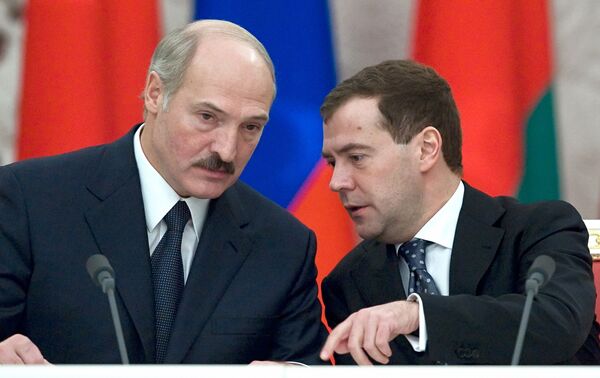 Russian President Dmitry Medvedev and his Belarusian counterpart, Alexander Lukashenko, will discuss on Friday the results of a regional security summit and bilateral relations.

"Today we can synchronize watches on the current situation and first of all bilateral relations, integration problems. We will determine if we can achieve economic progress or if there are irresolvable contradictions," Medvedev said in his Moscow Region residence in Gorki.

The Shanghai Cooperation Organization (SCO) is a regional security body comprising Russia, China, Kazakhstan, Uzbekistan, Tajikistan and Kyrgyzstan. It held a summit in the Uzbek capital Tashkent on Thursday and Friday. The summit in particular discussed the situation in Kyrgyzstan, as the country was rocked by a new wave of unrest.

Moscow has provided significant support to the new authorities in Bishkek, while Minsk has given refuge to ousted Kyrgyz President Kurmanbek Bakiyev.

The two countries also have differences over their Customs Union with Kazakhstan, but Medvedev held up increasing bilateral trade as a sign of progress. The president said Russian exports to Belarus grew some 20% in the first four months of 2010, whereas imports from Belarus grew by some 52%.

"It means we have brought into action certain necessary mechanisms," he said.

Lukashenko said he hopes for "a frank conversation."

"We have differences, but there are no irresolvable problems," the Belarusian president said.

"Our relations are those of allies," he told journalists.

The Customs Union between Russia, Belarus and Kazakhstan formally came into existence on January 1, but is unable to start working fully until disputes are resolved and the customs code comes into effect.

Russia, Belarus and Kazakhstan signed an agreement on the creation of the Customs Code in the Belarusian capital, Minsk, in November 2009. The code is to come into effect from July.

Moscow and Minsk faced off at the start of the year over tariffs on imports of Russian oil, which Belarus said should be completely duty-free in the Customs Union. Belarus even refused to attend a Customs Union meeting in late May.

Other issues under dispute include the import of foreign cars and aircraft into the union's customs territory.