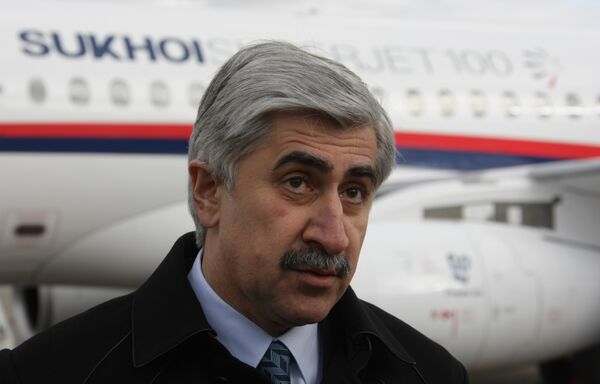 © RIA Novosti . Mikhail Kutuzov
/
Go to the photo bank
Subscribe
Russian aircraft holding Sukhoi has no plans to sign additional agreements creating a joint venture with its Indian partners in the production of a fifth-generation fighter, the general director said on Friday.

Russian aircraft holding Sukhoi has no plans to sign additional agreements creating a joint venture with its Indian partners in the production of a fifth-generation fighter, the general director said on Friday.

Sukhoi head Mikhail Pogosyan had said that an additional agreement would be signed specifying the Indian role in the project, but on Friday he said that the Russian company hoped work would begin soon without any such deal.

"We don't plan to sign a joint venture. We have agreed on joint work with our Indian colleagues," Pogosyan said.

He said the joint work could be carried out under the current agreement.

"We will do our part of the work, our Indian counterparts theirs," Pogosyan said. "At the initial stage it is not necessary to have a joint venture."

Earlier, HAL was reported to be seeking a 25% share in design and development in the project.

Russia has been developing its fifth-generation fighter since the 1990s. The current prototype, known as the T-50, was designed by the Sukhoi design bureau and built at a plant in Komsomolsk-on-Amur, in Russia's Far East.