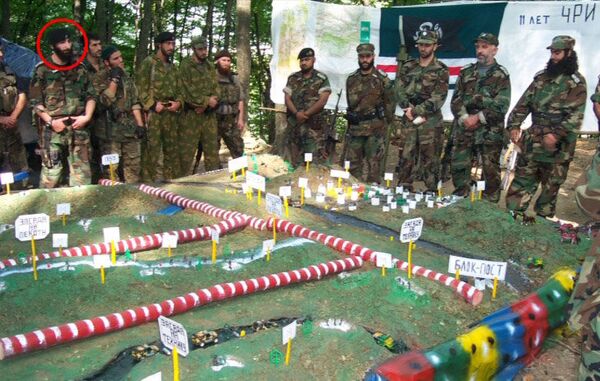 Alexander Bortnikov, the head of Russia's Federal Security Service (FSB), told President Dmitry Medvedev that Ali Taziyev, known as Magas, who was detained in the Ingush town of Malgobek, "is linked to the attack on President Yevkurov."

Yevkurov was badly injured on June 22, 2009, when his motorcade was hit by a car packed with explosives driven by a suicide bomber.

In a telephone conversation with RIA Novosti, Yevkurov called Taziyev a "mad dog" and demanded that he be sentenced to life in prison.

"In his cruelty and in terms of threat he posed to the peaceful population, Magas exceeds notorious terrorist leader Doku Umarov," Kadyrov said.

"I think that the detention of Magas is a major achievement for the FSB and want to congratulate all participants of the special operation on this result," he added.

A member of the Public Chamber, Russia's state monitoring body, joined in the praise, saying it was a big success that Magas had been arrested alive as he would have to stand trial for his crimes.

"In terms of the fight against terrorism, it puts Russia in a position of a normal democratic state," said Maxim Shevchenko, who is also an outspoken TV presenter.

He said he would not like to see media ascertaining Taziyev's guilt before trial because "every man, whatever he is detained for," should "have a right to a normal defense."

"This will be a guarantor of the battle against terrorism in the North Caucasus," he added.

The Federation Council's First Deputy Speaker Alexander Torshin said the detention of Magas would be a blow to the organization of insurgents across the whole region.

"Magas was surrounded by legends of his elusiveness and invulnerability, so it will take some time for the insurgents to rebuild and continue their activities," he said.

Bortnikov said the FSB was investigating Taziyev's crimes, which he detailed to the president.

"This bandit, together with [Shamil] Basayev, organized an attack on Nazran in 2004, and after that he was involved in the blowing-up of two passenger buses in the Stavropol region," he said.

"He was involved in the kidnapping of the relatives of former Ingush President [Murat] Zyazikov," Bortnikov added. "In 2009, [he] was behind the explosions in the building of the Interior Ministry in Nazran, which resulted in the deaths of dozens of officers."

The August 2009 truck bombing of the police headquarters in Nazran was Ingushetia's worst attack in several years, with at least 24 people killed.

"We will report on the progress of the investigation," the FSB chief told Medvedev, who said the participants that took part in the operation should receive government decorations.

Bortnikov declared the Yevkurov case closed in October 2009, telling a meeting of Russia's National Anti-Terrorism Committee that the militants behind the attack - the leaders of the "Ingush dzhamaat" group, Dzortov and Aliyev - had been killed in a police operation.