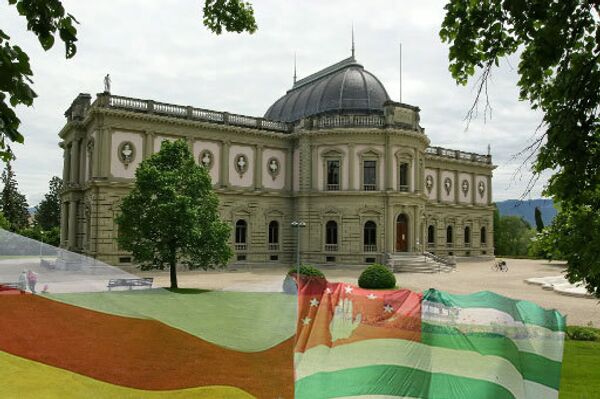 © Сollage by RIA Novosti
Subscribe
International
India
Africa
The U.S. opposed a binding non-use of force deal between Georgia and its former republics during international discussions on security in South Caucasus.

The U.S. opposed a binding non-use of force deal between Georgia and its former republics during international discussions on security in South Caucasus, a South Ossetian envoy to the talks told RIA Novosti.

A new round of talks on Transcaucasus, launched after Russia's war with Georgia in 2008, was held on Tuesday in Geneva. The talks involve Georgia, Russia, the United States and former Georgian republics of South Ossetia and Abkhazia, recognized by Russia as independent states.

The next round of the discussions, backed by the UN, the EU and the OSCE, is scheduled for July 27.

"It may be said that the U.S. seeks to bury the Geneva discussions. The Americans say: why signing the [non-use of force] deal? Better let us carry out humanitarian operations," Boris Chochiyev said, adding that little progress was made during the talks.

He added that the most important problem for his country was to prevent a new, U.S.-supported, Georgian attack to bring the former republics, also recognized by Venezuela, Nauru and Nicaragua, under central control.

The U.S. delegation to the talks said in a written statement that the French-mediated ceasefire agreement signed by Georgian President Mikheil Saakashvili and Russian President Dmitry Medvedev on August 12, 2008, "already establishes the sides' commitment to the non-use of force."

"Full implementation of that agreement — which we still await from the Russian Federation — would render an additional agreement unnecessary," the statement said.

Russian Deputy Foreign Minister Grigory Karasin said the ceasefire agreement were "not enough" to guarantee security in the region.

"We can't constantly refer to these agreements as a guarantee of peaceful, happy life in the region," Reuters quoted Karasin as saying.

The U.S. and its Western allies have repeatedly criticized Russia for its military cooperation with the South Ossetia and Abkhazia on the grounds that it contravenes the ceasefire deal.

"So if there is any new agreement, which we are ready to work on with the Russian Federation, it should comply with all of those points which already exist in the 12th of August agreement," Georgian First Deputy Foreign Minister Giorgi Bokeria said after the talks.

Each base is likely to host up to 1,700 servicemen, T-62 tanks, light armored vehicles, S-300 air defense systems and various aircraft.

Tbilisi, which considers Abkhazia and South Ossetia its "occupied territory," insists that Russian forces should withdraw from the republics as the ceasefire deal rules out Russian military presence in Georgia.