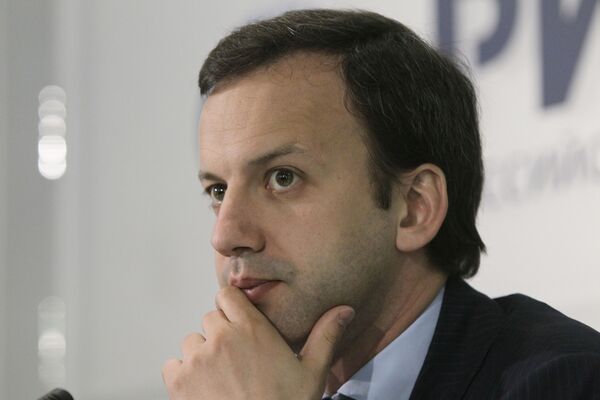 © RIA Novosti . Alexei Kudenko
/
Go to the mediabank
Subscribe
International
India
Africa
Russian presidential aide Arkady Dvorkovich will play chess on Wednesday with the robot that will represent Russia at the first ever international robot chess championships next year.

Russian presidential aide Arkady Dvorkovich will play chess on Wednesday with the robot that will represent Russia at the first ever international robot chess championships next year.

The robot was created using the newest technology and software. It has artificial intellect and can accurately move pieces on a chessboard. Although Dvorkovich also heads the supervisory board of the Russian Chess Federation, he has little chance against his computerized opponent.

Computer programs were proved to be better chess players than men in 1997 when Chess Grandmaster Garry Kasparov lost a game against the Deep Blue computer program.

"Man has no chance against a good chess program based on good software," said Konstantin Kostenyuk, a famous Russian chess coach and one of the robot's developers.

Next year's robot championships, which will be held in Russia, are unique since the machines will play blitz games, make quick decisions, and quickly and accurately move the pieces.

"The robot will do everything on its own: it will move the pieces and operate the chess clocks. Not only will it have to think quickly, but it will also be under pressure to move the pieces quickly because time limits are set in blitz game rules," he added.

Grandmaster Narek Seferjan told RIA Novosti that chess tournaments between robots are an interesting idea that will certainly increase the popularity of the game. However, he also said such tournaments will never be more popular or more interesting than chess games between humans.

He said that in the 1980s, when chess was at its popularity peak, spectators would watch matches between Soviet chess legends Anatoly Karpov and Garry Kasparov with binoculars, although they could clearly see the pieces being moved on big screens.

"It is all about a human factor and human emotions; people want to see the faces of the opponents, the way they express their emotions. That's what makes this game interesting. Computer programs have no emotions," Seferjan said.