New space 'eye-candy' to appear in skies in mid-June 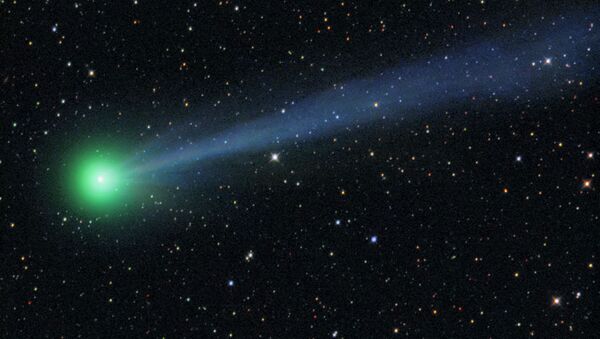 © Michael Jäger
Subscribe
International
India
Africa
The C/2009 R1 comet is nearing the Earth and will be visible in the Northern hemisphere with a naked eye in mid-June, NASA said on its website.

The comet, discovered in 2009 by well-known British-Australian astronomer and "comet-catcher" Robert H. McNaught, is already visible through powerful binoculars in the morning sky.

NASA said the comet will reach its closest proximity to the Earth by June 15 and could shine just above the horizon in the Perseus constellation. It could be brighter than Venus and visible during the day.

The comet's green plasma head, or coma, is larger than the planet Jupiter, while the long willowy ion tail stretches more than a million kilometers through space.

Russian astronomer Leonid Yelenin from the Keldysh Institute of Applied Mechanics said on Tuesday the comet would be clearly visible in Russia.

"It will be visible in the morning and will present a good object for observation, although its beautiful tail is unlikely to be discernable," Yelenin said.

He said the brightness of the comet could vary as it nears the Sun and could either fade quickly or suddenly increase its magnitude.

"Different models estimate its brightness at magnitude three or even one," he said.

The apparent magnitude of a celestial body is a measure of its brightness as seen by an observer on Earth, normalized to the value it would have in the absence of the atmosphere.

The brighter the object appears, the lower the value of its magnitude. Very bright objects have negative magnitudes.

Sirius, the brightest star of the celestial sphere, has an apparent magnitude of -1.4, while the stars of the Big Dipper are magnitude two.

The best time to spot the comet is June 11-13, when the new lunar cycle will provide a particularly dark night time sky.