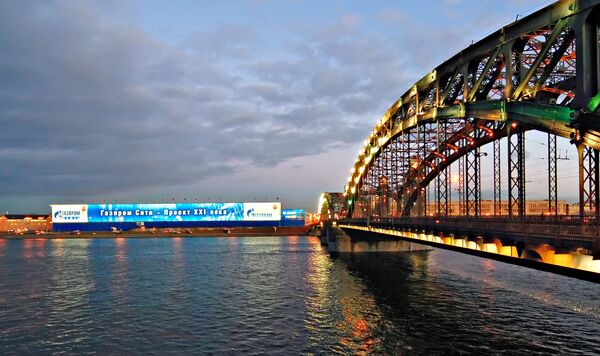 © RIA Novosti . Aleksey Danitchev
/
Go to the mediabank
Subscribe
International
India
Africa
A court in St. Petersburg has given a green light for the construction of a 403-meter skyscraper in the heart of the city, despite President Dmitry Medvedev's disapproval, Russian business daily Kommersant said on Tuesday

A court in St. Petersburg has given a green light for the construction of a 403-meter skyscraper in the heart of the city, despite President Dmitry Medvedev's disapproval, Russian business daily Kommersant said on Tuesday.

"We expected that - it was clear that a district court would not make a positive decision in such a high-profile case," said Maxim Reznik, leader of the St. Petersburg branch of Russian liberal party Yabloko, who are against the project.

"Although it looks like Judge Matusyak has simply dismissed the president's opinion," he added.

His statement comes after the Smolninsky district court dismissed on Monday a suit from an activist group, spearheaded by Yabloko, which oppose the Gazprom-led construction of the Okhta business center on one of St. Petersburg's UNESCO World Heritage sites.

Yabloko's suit had received an unexpected boost from President Dmitry Medvedev, who joined UNESCO's call to limit construction in late May.

The activists accused the city's authorities of flouting the City Planning Code, saying that under a 2001 law, buildings in the area cannot be higher than 100 meters.

They said the skyscraper would be a giant eyesore in the midst of the city, hampering access to heritage objects as well as spoiling the city's historic panoramas.

Yabloko used the president's support to accuse the city's authorities of a greater crime - that of the violation of international law, namely the Convention Concerning the Protection of World Cultural and Natural Heritage, which was adopted by UNESCO in 1972.

Governor Valentina Matviyenko gave the go-ahead for the construction in September 2009 despite strong public opposition.

Matviyenko is reported to have said in July 2009 that St. Petersburg had gained nothing from UNESCO and the organization was just "a pretty bow on the body of St. Petersburg."