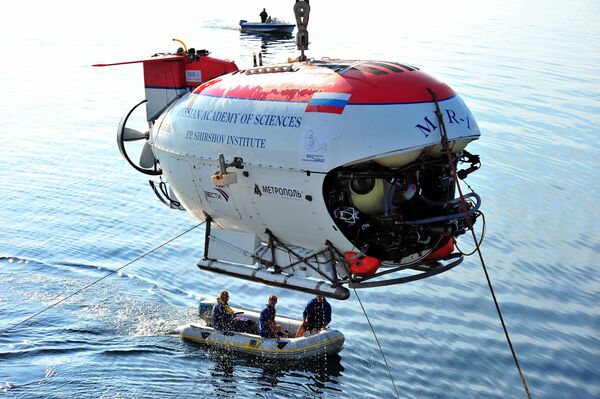 The British oil giant BP wants Russian mini-subs to help in eliminating the oil spill in the Gulf of Mexico, Izvestia daily said on Monday.

The British oil giant BP wants Russian mini-subs to help in eliminating the oil spill in the Gulf of Mexico, Izvestia daily said on Monday.

Anatoly Sagalevich of Russia's Shirshov Institute of Oceanology, which owns the Mir submersibles, was quoted as saying that talks with BP officials had started soon after the accident.

The leak started more than six weeks ago following an explosion on the Deepwater Horizon oil drilling platform that killed 11 rig workers. An estimated 12,000-19,000 barrels gush up daily from the seabed, posing a major threat to the Gulf of Mexico's flora and fauna.

BP, the owner of the rig about 80 kilometers (50 miles) off the Louisiana coast, has tried with little success to stem the flow of oil. It says it is now managing to gather about 10,000 barrels of oil a day using a special plugging device attached to the head of the drill to siphon oil up to surface ships.

Sagalevich told the Izvestia daily the Mir mini-subs could stop the leakage, but it would take some time.

Sagalevich said the Mirs would be the most effective since they are operated by people on board rather than remotely, allowing for a more thorough investigation.

"Visual research by specialists is very important, regardless of the fact that more than 50 remote-controlled underwater robots are working at the scene of the accident delivering the images from the seabed to the surface," the paper quoted the researcher as saying.

He added, however, that the depths involved could hinder the submersibles' operation.

Last week the U.S. filmmaker James Cameron suggested to BP that Russian mini-subs Mir help to tackle oil spill in the Gulf of Mexico, but the oil major rejected the idea.

Cameron, the director of the two highest-grossing films of all time, Avatar and Titanic, worked with the Mir mini-subs while filming in the latter 1997. The advanced deep-water equipment, used during an expedition to the sunken liner, helped to film the ship's destroyed interiors and provided the movie with more authentic sets.

Explaining BP's dismissal, Sagalevich said last week that "we are Russians, and if we go to the Gulf of Mexico with Mirs and do something there, the Americans would be appalled."