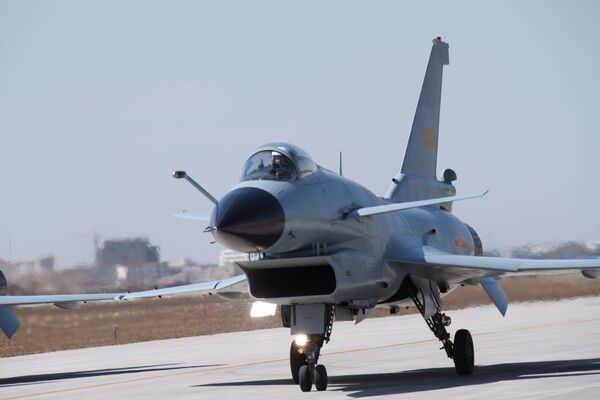 China's J-15 carrier-based fighter will not be able to compete with Russia's Su-33 fighter on global markets because it is inferior to the Russian aircraft, a Russian military analyst said on Friday.

China's J-15 carrier-based fighter will not be able to compete with Russia's Su-33 fighter on global markets because it is inferior to the Russian aircraft, a Russian military analyst said on Friday.

China since 2001 has been developing the J-15 naval fighter, which is believed to be a clone of Russia's Su-33 Falcon-D. China bought an Su-33 prototype earlier from Ukraine, and used it to develop the new aircraft.

The J-15 is expected to be stationed initially onboard the Chinese Varyag aircraft carrier currently being fitted in the port of Dalian. China bought the unfinished Admiral Kuznetsov class aircraft carrier from Ukraine in 1998.

"The Chinese J-15 clone is unlikely to achieve the same performance characteristics of the Russian Su-33 carrier-based fighter, and I do not rule out the possibility that China could return to negotiations with Russia on the purchase of a substantial batch of Su-33s," said Col. (Ret.) Igor Korotchenko, a member of the Defense Ministry's Public Council.

The Su-33 is a carrier-based multi-role fighter, which can perform a variety of air superiority, fleet defense, air support and reconnaissance missions. The aircraft entered service with the Russian Navy in 1995 and are currently deployed on board the Admiral Kuznetsov aircraft carrier.

Korotchenko said China was unlikely to solve technical problems related to the design of the folding wings and to develop a reliable engine for the aircraft, although the first J-15 prototype reportedly made its maiden flight on August 31, 2009, powered by Chinese WS-10 turbofan engines.

China and Russia had been in negotiations on the sale of the Su-33 Flanker-D fighters to be used on future Chinese aircraft carriers since 2006, but the talks collapsed over China's request for an initial delivery of two aircraft for a "trial."

Russian Defense Ministry sources confirmed that the refusal was due to findings that China had produced its own copycat version of the Su-27SK fighter jet in violation of intellectual property agreements.

The deal required the aircraft to be outfitted with Russian avionics, radars and engines. Russia cancelled the arrangement in 2006 after it discovered that China was developing an indigenous version, J-11B, with Chinese avionics and systems. The decision came after China had already produced at least 95 aircraft.

Last year, Russia refused again to sell the Su-33 to China even after Beijing had offered to buy 14 of them, saying that at least 24 jets should be sold to recoup production costs.