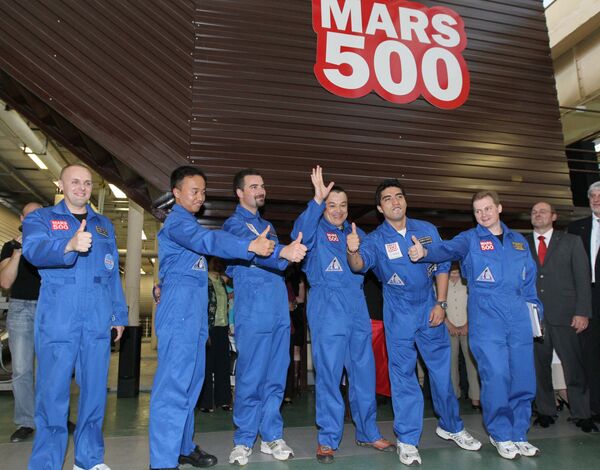 © RIA Novosti . Alexey Kudenko
/
Go to the photo bank
Subscribe
The participants in a simulated Mars expedition will "take off" for a 520-day "space trip" on Thursday, a spokesman for the Moscow Institute of Medical and Biological Problems said

The participants in a simulated Mars expedition will "take off" for a 520-day "space trip" on Thursday, a spokesman for the Moscow Institute of Medical and Biological Problems said.

Six people will take part in the experiment in the Mars-500 module, which will simulate all aspects of a journey to the Red Planet, with a 250-day trip there, a 30-day stay on its surface, and a 240-day return flight, Pavel Morgunov said.

The exploration of Mars has been an important part of the space exploration programs of the Soviet Union, the United States, Europe, and Japan. It has become a focus of the U.S. space program as President Barack Obama scrapped the lunar program earlier this year.

During nearly two years of isolation, the crew members will experience many of the conditions likely to be encountered by astronauts on a real space flight, except for radiation and weightlessness.

Three of the six crew members will leave the "spacecraft" and "walk" on Mars, becoming the first people to "set foot" on the Red Planet.

Each of the crew members will receive about 3 million rubles ($100,000) for participating in the mission, which is headed by Russia's Alexei Sityev.

The crew will communicate with Earth via e-mails with a 40-minute delay, Morgunov said. The crew's "spacecraft" is equipped with a laboratory, living area, warehouse and mini-garden.

The project initially involved 11 candidates: seven candidates from Russia and one each from China, France, Italy and Belgium. Three Russians, a Frenchman, a Chinese, and an Italian have been selected to take part in the mission.