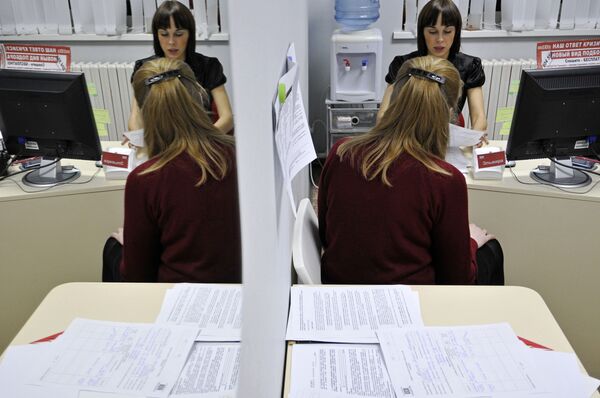 © RIA Novosti . Mihail Mordasov
/
Go to the photo bank
Subscribe
Russia’s declining population could result in labor shortages by 2025, according to a report by ANKOR business holding titled “Business and labor in Russia and the CIS over the past 20 years: The labor market as an indicator of a country’s economy.”

Russia’s declining population could result in labor shortages by 2025, according to a report by ANKOR business holding titled “Business and labor in Russia and the CIS over the past 20 years: The labor market as an indicator of a country’s economy.” The report was presented at RIA Novosti.

The human resources industry is becoming strategically important in Russia, said ANKOR deputy general director for business development Alexei Mironov. “In the past, companies just had human resources departments, but now HR managers sit on boards of directors and are involved in developing business strategies,” he added.

“Experts estimate that the Russian population will decline by 20 million by 2025. Consequently, we will have to bring in nearly 35 million immigrant workers,” said ANKOR-Russia director Anna Silina during a videoconference with company representatives in various Russian regions.

There is already a gap between labor supply and demand according to Nikolai Shalayev, head of the company’s Northwest macro-region (St. Petersburg).

He said the regions were slowly recovering from the global economic and financial crisis and struggling to recruit skilled workers.

The ANKOR report finds the lowest unemployment levels in the Central Federal District. The North Caucasus and Volga federal districts have the largest unemployment problems.

Yelena Grinyova, head of the company’s South macro-region (Rostov-on-Don), said southern Russia has increasingly turned to immigrant labor, including foreign specialists. This is partly related to preparations for the 2014 Winter Olympics in Sochi.

Grinyova also cited the unfavorable demographic situation as a cause, stating that some regions of the South Federal District “simply won’t be able to manage without a well thought-out immigration policy.”

Valeria Sheveleva, head of the company’s East macro-region (Novosibirsk), said economically active individuals are currently leaving Siberia for western Russia, which is resulting in a local demographic situation that can be considered critical.

Tatyana Berezhnaya, director of ANKOR’s Yekaterinburg office, discussed the situation in the Ural Federal District: “The Ural labor market was greatly impacted by the crisis, and wages in the region plunged.” She said this process did not affect Yekaterinburg, where wages are still high. But the city also has one of the highest costs of living.

ANKOR deputy general director for business development Alexei Mironov discussed the situation in Moscow and Central Russia, where the labor market has “overheated,” to use his words. “There are two main reasons for this,” Mironov said. “The first is the ever-increasing demand for labor. The number of vacancies has been on the rise since early 2010. The second trend is Russia’s demographic problem and the declining economically active population.”

ANKOR general director Sergei Salikov announced his company’s plans to enter the Southeast Asian market. “We plan to expand into China and Singapore, and then gradually increase our market share there,” Salikov said.