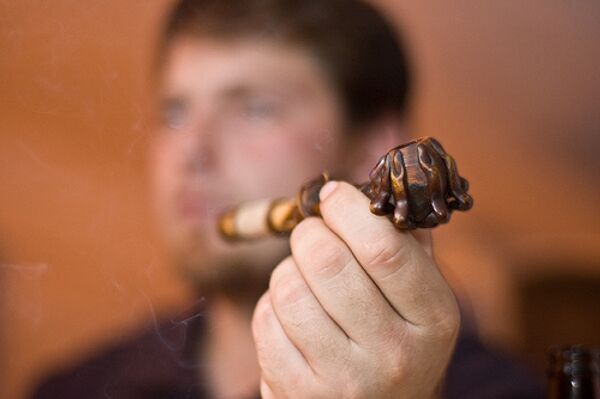 © Flickr / Marin Nikolov
Subscribe
The Russian government has entered a number of components of widely used smoking blends on the list of narcotic substances, thus prohibiting their use

The Russian government has entered a number of components of widely used smoking blends on the list of narcotic substances, thus prohibiting their use.

The Ministry of Healthcare and Social Development has previously suggested limiting the use of smoking blends and toughening liability for their sale and circulation.

Smoking blends, also known as smoking mixes, consist of herbs and extracts. The herbs found in smoking mixtures are entheogens and have been known to mankind for a long time.

Entheogens (whose name means in Greek “deification from within”) are substances scientifically classified as psychotropic herbs. Shamans, pagan priests and soothsayers of old took entheogens to produce a mystical state in which they claimed to communicate with gods and spirits. In the modern usage, the term brings together a number of legal psychotropic substances that have varying effects. Experts say that chemical classification is not easy because only several structural varieties of alkaloids, terpenoids and amino acids composing them possess psychoactive qualities.

There are two kinds of smoking blends.

The first consists of real herbs mixed in particular proportions to achieve the desired effect.

The other group is herb blends treated with chemicals (synthetic cannabinoids) that are entirely lab-produced.

The JWH 018 synthetic cannabinoid, contained in some mixes, is five times stronger than marijuana.

Smoking blends have become very popular in Russia recently. Rumors of their existence began in 2007, and their widespread circulation and use only started in late 2008 - early 2009. They proved popular due to their legality and cannabis-like effect.

As expert studies have shown, smoking these mixes causes individuals to start laughing for no reason and renders them unable to communicate with those around. Such behavioral changes can last a long time. Gennady Onishchenko, the chief state sanitary doctor of the Russian Federation, notes that in addition to these temporary effects, smoking blends can also have a permanent effect on the user, who becomes a drug addict, chronically ill, and suffering severe disability.

Information from the Ministry of Healthcare and Social Development reveals the major threat posed by the widespread popularity of smoking blends. Mass adolescent poisonings have become increasingly frequent. In this connection, the chief state sanitary doctor of the Russian Federation signed a resolution on tougher monitoring of smoking blend sales in April 2009 to prohibit the circulation of blends containing certain herbs countrywide.

The updated list of prohibited narcotic and psychotropic substances includes such widespread smoking blend ingredients as Salvia divinorum leafs, Salvinorin A seeds, Argyrea nervosa, and the flowers and seeds of Nymphea caerulei.

All smoking blends of chemically treated herbs have been prohibited as especially destructive to human health.

The Moscow Sechenov Medical Academy received the recommendation to develop methods to diagnose smoking blend use.

Gennady Onishchenko also signed the executive order on endorsing sanitary regulations and standards No. 2.3.2.2567-09 on the hygienic specifications of food safety and nutritional value, which amends the list of bioactive substances, food ingredients and basic products that might have a negative effect on human health when used as nutritional supplements. The list has been extended with 23 plants, of which 18 have hallucinogenic and psychotropic effects.

The reference has been prepared based on RIA Novosti and open source materials.