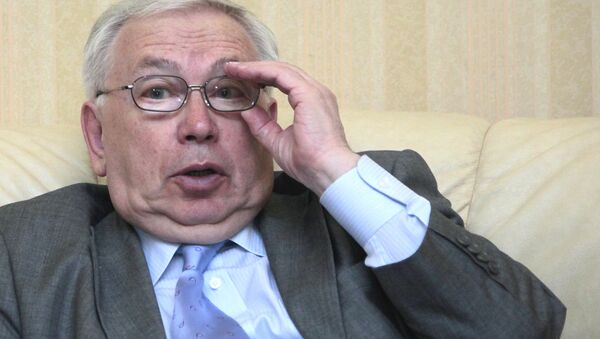 Moscow police detained up to 170 people who gathered in the city's Triumfalnaya Square for a March of Dissent rally. Lukin, who was at the rally, said police actions were "a serious step backwards" in the implementation of the constitutional right for peaceful assembly.

"The interior ministry should carry out a thorough investigation into what had happened. The Moscow and federal authorities must initiate this investigation," he said.

He said the opposition activists had done nothing to justify such a brutal response.

"The authorities should have addressed the protestors and asked them to pay a fine for the alleged violation of the law," the ombudsman said. "If people failed to pay the fine, then they could have been detained... But no such offers were made."

"People were caught and dragged across the asphalt; there were people with disabilities and war veterans... The response was very brutal," Lukin said.

Despite reports to the contrary, the Moscow police department said no veterans were among those detained.

A spokeswoman for the Moscow police department said the rally had not been "sanctioned" by the authorities, as the Triumfalnaya Square was already being used by the Young Guard of United Russia (MGER) to hold a rally in support of voluntary blood donations.

The spokesman said the opposition had been given the option to choose another venue for their gathering, but had rejected all alternative locations.

Most of the detainees face charges of resisting the police. Police authorities also detained reporters, who were wearing police-issued journalist ID cards, including The New Times editor-in-chief Yevgeniya Albats. A reporter for GZT.ru news portal reportedly had his arm broken while in detention.

Lukin said authorities are not entitled to "permit" rallies, and only prior written notification is required for a "sanctioned" rally.

However, Russian law also permits authorities to propose another date or location for a rally for a good reason, and ban the event if the sides fail to come to terms.

An aide for Lukin said earlier on Tuesday the ombudsman would submit to the Russian leadership his proposals for avoiding police violence and detentions during opposition rallies.

"Vladimir Petrovich [Lukin] will soon prepare his report for the president and the government; his proposals are aimed at preventing yesterday's events from happening again," Natalya Mirza.

The March of Dissent organizers said they would file a request to hold the rally at Triumfalnaya Square on July 31.

"We will definitely file a request to hold a rally on July 31. We hold the rally at Triumfalnaya Square on every 31st, and the Moscow authorities artificially create obstacles for us, rejecting our applications in favor of imaginary events," opposition leader Lev Ponomarev said.