Over 130 protesters detained in Moscow 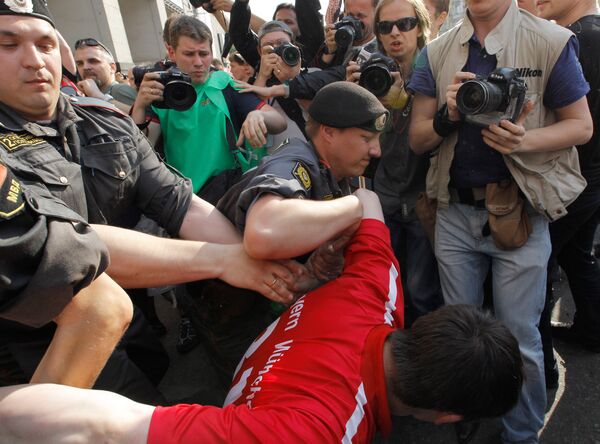 Over 130 people who organized an unauthorized protest and attempted to block traffic on Moscow's Tverskaya street were arrested on Monday, Moscow police spokeswoman said.

Zhanna Ozhimina said authorities proposed the protesters hold their rally in a number of other places, but they decided to hold it on Moscow's Triumfalnaya Square, nearby Tverskaya street, during a blood donation event for children.

"The offenders tried to block traffic on Tverskaya street and hold a so-called march of the dissenters," Ozhimina said. "The illegal event was stopped using police measures, police detained more than 130 people."

Police said all the detainees would be released after protocols on administrative violations were prepared.

The Russian leadership has been reluctant to allow the opposition to hold full-scale anti-government protests.

In March, Russian police authorities closed down an Internet website calling for participants to hit the streets throughout the nation in protests during the "Day of Wrath."

Last month the lower house of the Russian parliament, the State Duma, was reviewing a bill to restrict protest rallies by motorists after a demonstration caused traffic chaos in Moscow and St. Petersburg.

Vedomosti said the Russian government already acted in January on calls for more rigorous punishments for protesters who violate traffic safety rules. The parliament approved on first reading a bill that would impose 100,000 rubles ($3,421) or two year prison sentences to protesters found to be "blocking highways."

In April, a new bill submitted to the Russian parliament that allows "preventive measures" against individuals committing extremist actions fueled fears among opposition parties of a revival of Soviet-era practices.

Existing legislation allows the Russian Federal Security Service (FSB) to impose preventive measures, such as official warnings and fines, on organizations whose activities could be considered extremist, but does not allow these measures to be applied to individuals.