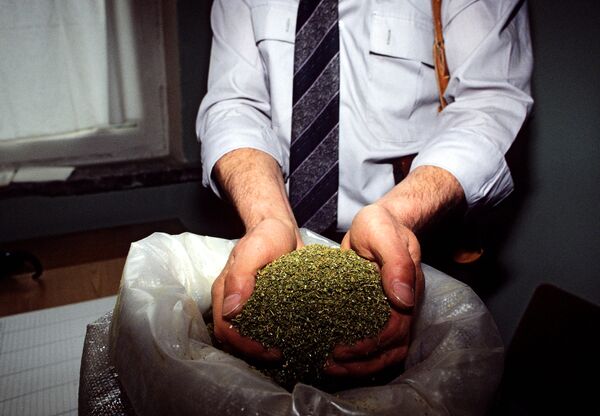 © RIA Novosti . Oleg Lastotchkin
/
Go to the photo bank
Subscribe
Afghanistan ranks first in the world in the production of heroin and marijuana

Afghanistan ranks first in the world in the production of heroin and marijuana.

In August 2009, Viktor Ivanov, head of the Federal Drug Control Service (FSKN), reported that 90% of the world’s heroin production is concentrated in Afghanistan, of which no less than 50% is transported along the “northern route” through Central Asia and on to Russia.

According to Mr. Ivanov, 35 tons or five billion injections of Afghan heroin are smuggled into Russia each year.

According to UN estimates, each year up to 100,000 people, mostly in Russia, die from using Afghan heroin.

The cultivation of drug crops in Afghanistan and a number of other southern Asian countries is, to some extent, a traditional occupation.

From the early 1980s to the late 1990s, opium poppy was grown and raw opium was rectified (initial processing) in the regions populated by Tajiks and Pashtuns – in the Helmand River valley and around the cities of Feyzabad, Kunduz, Kandahar, Jalalabad and Farah. Additional processing of Afghan opium took place in neighboring countries with chemical industries.

The situation changed dramatically in the first months following the launch of the U.S. and British “counterterrorist operation” in October 2001.

State Secretary and FSKN Deputy Director Oleg Safonov has reported that according to UN estimates drug production in Afghanistan has increased 44-fold since 2001, when Operation Enduring Freedom began.

Today, poppies are being grown and raw opium is being extracted throughout Afghanistan. In the provinces of Nangarhar, Khost, Paktiya, Helmand, Kunar and Balkh and in the cities of Kunduz and Feyzabad, drug lords carry out the full production cycle, from growing the poppies and extracting the raw opium to processing the opium into morphine, the basis of heroin, and finally into the finished product, heroin hydrochloride (diacetylmorphine hydrochloride). They store the heroin themselves and sell wholesale quantities on the markets in Chitral, Pakistan and Kandahar, Afghanistan.

In Kandahar, drug lords have set up a fully functional bank network that issues loans for future poppy harvests. In just a few years, they arranged for wholesale supplies of mineral fertilizer and precursors (chemicals used in heroin production) from Pakistan’s chemical plants, and expanded opium cultivation at the expense of other agricultural crops (grain, corn, barley and rice).

In 2009, the prices of raw and dried opium poppy fell by a third, causing the overall value of Afghan opium production to drop by 40% in 2009 – from $730 million to $438 million. The number of peasants engaged in opium cultivation also fell considerably – from 2.4 million to 1.6 million people.

According to a report published by Afghanistan’s Ministry of Counter Narcotics, in 2007 there were about 300 smuggling points on the Afghan border. The majority of them are controlled by local field commanders, reports the ISNA news agency.

According to the Ministry of Counter Narcotics, the main drug markets of Afghanistan are located in the Musa Qala and Sangin districts of Helmand Province in the south of the country.

There is a well-organized network for transporting drugs to where they are sold, consisting of a Balkan route, a southern route and the so-called “northern corridor.”

Chemical precursors used in heroin production, primarily acetic anhydride, are sent back along the same routes.

The Afghan government has repeatedly asked international coalition forces to help counter the drug threat, but the coalition refused to take part citing its lack of a mandate.

According to Afghanistan’s Ministry of Counter Narcotics, only the United Kingdom and the United States are helping Afghanistan to counter drug production and trafficking.

In early May of this year, the Afghan government news agency Bakhtar reported that the United Kingdom provided the Afghan Ministry of the Interior with six Russian-designed Mi-17 helicopters, which the Counter Narcotics Police of Afghanistan (CNPA) will use to destroy drug labs.

The UK bought the helicopters from an eastern European country for a total of $30 million. They will be operated by Afghan pilots who have passed a two-year training program in London.

According to the Deputy Interior Minister for Counter Narcotics and head of the CNPA, General Mohammad Daud Daud, these helicopters will greatly improve Afghanistan’s efforts to counter drug production.