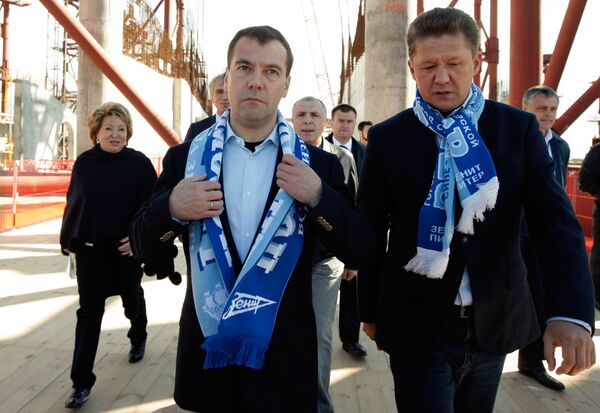 © POOL
/
Go to the photo bank
Subscribe
Russian President Dmitry Medvedev paid a visit on Sunday to the construction site where Zenit St. Petersburg are building a new 68,000-seat stadium.

Russian President Dmitry Medvedev paid a visit on Sunday to the construction site where Zenit St. Petersburg are building a new 68,000-seat stadium.

The Zenit-Arena, which is being built on Krestovsky Island in St. Petersburg at an estimated cost of $250 million, will be the largest club stadium in Russia.

Medvedev was told by St. Petersburg Governor Valentina Matvienko that the capacity had been increased as part of Russia's bid to host the World Cup in 2018 or 2022.

"The stadium will be a sliding roof and sliding pitch that will preserve a good quality playing surface. There are no such stadiums in the north of Europe," she added.

Stadium facilities are a concern for the World Cup bid, with only Lokomotiv of the four top-flight Moscow sides having their own stadium, which seats less than 30,000. CSKA, Spartak and Dynamo play their games either at the national Luzhniki Stadium or the Khimki Arena just north of the capital.

Medvedev praised the change in plans to help Russia meet FIFA requirements for hosting a World Cup, but warned that regular fans must not be left out.

"The project is of course grandiose, but the main thing is that it does not lead to a rise in prices for ordinary fans. VIP-boxes - this is certainly good, but prices should be nearly the same as at the old stadium," Medvedev said.

Zenit, sponsored by national gas monopoly Gazprom, are expected to play their home games at the new venue from next year.

Designed by Japanese architect Kisho Kurokaw, the Zenit-Arena will provide 640 places for disabled spectators and 2,100 places for members of the media. In addition, the stadium will have 7,000 VIP seats.

The arena will also house shops, restaurants, an exhibition hall and a business center.