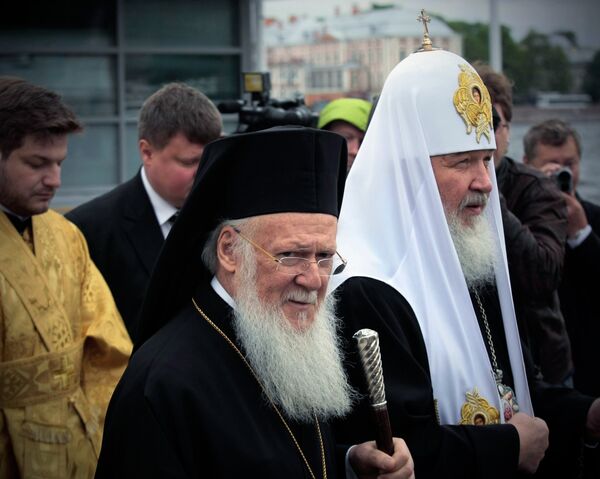 © RIA Novosti . Alexei Danichev
/
Go to the photo bank
Subscribe
Joint worship with Ecumenical Patriarch of Constantinople Bartholomew has strengthened the unity of Orthodox churches worldwide, Patriarch of Moscow and All Russia Kirill said on Sunday.

Joint worship with Ecumenical Patriarch of Constantinople Bartholomew has strengthened the unity of Orthodox churches worldwide, Patriarch of Moscow and All Russia Kirill said on Sunday.

The two patriarchs celebrated Divine Liturgy together for the third time on Sunday in St. Isaac's Cathedral in St. Petersburg.

The official visit of the leader of the Constantinople Church, who is by tradition first among the 15 primates of the Orthodox churches, began last week, with joint services on May 22 and 24.

"Our celebration today is dedicated to the unity of the universal church," said the Russian patriarch, who is fifth in the Orthodox hierarchy.

"We have known each other a long time, and I am glad that with each meeting we become closer to each other, so that the relations between Orthodox churches grow stronger," Kirill said after the joint liturgy.

Speaking in the main cathedral of St. Petersburg, Kirill noted that Russia's second city has much in common with Constantinople, now known as Istanbul.

"Each of these cities was fated to become the mainstay and focus of a great culture, both cities are capitals of the great Orthodox empire," the Russian patriarch said.

The head of the Ecumenical Patriarchate of Constantinople, in turn, called St. Petersburg "a symbol of heroism, steadfastness and faith in the ideals of freedom."

In memory of Bartholomew's visit to Russia, the Russian patriarch gave the head of the Church of Constantinople a copy of the Feodorovsky icon of the Mother of God.