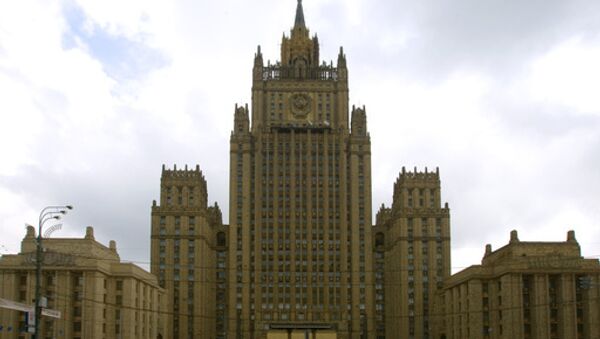 © Sputnik
Subscribe
Russia welcomes a deal approved by a UN conference on nuclear non-proliferation and is prepared to implement it, the Foreign Ministry said in a statement on Sunday

Russia welcomes a deal approved by a UN conference on nuclear non-proliferation and is prepared to implement it, the Foreign Ministry said in a statement on Sunday.

The 28-page final document was approved on Friday, the last day of the conference, which had lasted for almost a month since May 3.

"During the entire work of the conference, the Russian delegation maximally contributed to its productive conclusion and the unification of the efforts by all member states in achieving this goal. We are satisfied that practical proposals and ideas advanced by Russia during the conference were reflected in the final document," the statement said.

The five nuclear powers - Britain, China, France, Russia and the United States - committed to speed up arms reductions, take other steps to diminish the role of nuclear weapons, and report back on progress by 2014.

"In implementing the unequivocal undertaking by the nuclear- weapon states to accomplish the total elimination of their nuclear arsenals, the nuclear-weapon states commit to undertake further efforts to reduce and ultimately eliminate all types of nuclear weapons, deployed and non-deployed," the document said.

The declaration also states that a conference "on the establishment of a Middle East zone free of nuclear weapons and all other weapons of mass destruction" should be conveyed in 2012.

The review conference on nuclear non-proliferation is convened every five years. Participants in the 2005 conference failed to approve a final document due to a number of disagreements on major issues.