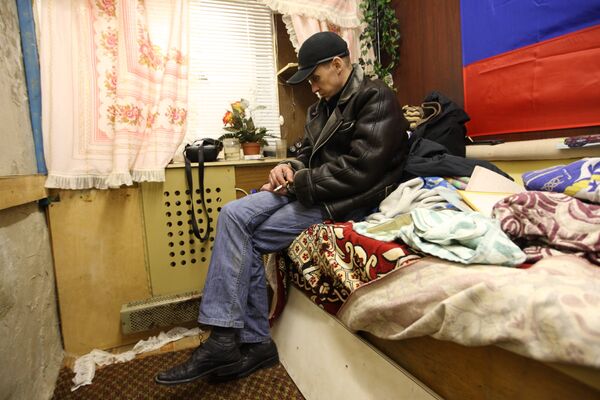 © RIA Novosti . Pavel Lisicin
/
Go to the photo bank
Subscribe
In compliance with the (amended and supplemented) Federal Law On Narcotic Drugs and Psychotropic Substances, of January 8, 1998, the state guarantees medical aid to drug addicts, including assessment, consultations, diagnostic procedures, treatment and medical and social rehabilitation

In compliance with the (amended and supplemented) Federal Law On Narcotic Drugs and Psychotropic Substances, of January 8, 1998, the state guarantees medical aid to drug addicts, including assessment, consultations, diagnostic procedures, treatment and medical and social rehabilitation.

Adult patients receive medical treatment on their request or with their consent. Patients’ consent is unnecessary for minors under 16 years of age. Their treatment requires the request/consent of their parents or legal representatives with the exception of instances stipulated by the legislation of the Russian Federation.

Addicts under medical observation, who continue the use of narcotic drugs or psychotropic substances without doctor’s prescription or evade medical treatment, and persons convicted for criminal offences and needing anti-drug treatment receive coercive treatment stipulated by the legislation of the Russian Federation on court ruling.

Drug addicts are assessed, diagnosed and consulted, and receive medical and social rehabilitation at state, municipal and private medical establishments licensed for said activities according to the procedure stipulated by the legislation of the Russian Federation.

Yevgeny Bryun, top substance abuse official at the Ministry of Healthcare and Social Development of the Russian Federation and director of the Moscow Addiction Research and Treatment Center, says the number of drug addicts openly applying to addiction clinics has increased substantially since 2002, when they accounted for just 9% of the patients of such clinics and hospitals (alcoholics making the rest), against 36% in 2009.

In Ivanov’s opinion, the resources available to the Russian anti-drug service, which includes medical treatment and rehabilitation, have deteriorated within the last 18 years: the number of addicts has gone up by at least 20-fold since 1993, while the number of hospital beds for addicts has decreased 50-fold.

As the FSDC head said, 99% of drug addiction treatment amounts to detoxification, which is only the first step and should be followed by extensive medical treatment and, after it, medical and social rehabilitation at rehabilitation centers.

Nevertheless, “there are only three [federal] rehabs in all of Russia, and they are located in North Ossetia, the Tyumen Region and the Kurgan Region” (RIA Novosti, June 26, 2009). By contrast, there are 600 state rehabilitation centers in China.

According to Tatyana Klimenko, head of the drug addiction and alcoholism forensic expertise department at the Serbsky National Research Center for Social and Forensic Psychiatry under the Ministry of Healthcare and Social Development, anti-drug treatment has extremely small effect in Russia: 80%-85% of addicts apply to state health services only for detoxification, i.e., first aid, and refuse to undergo rehabilitation after it. Many patients undergo treatment five or six times, and only 8.6% have no relapses a year after treatment.

The reference is based on open source materials.