UEFA calls for Ukraine to step up preparations for Euro 2012 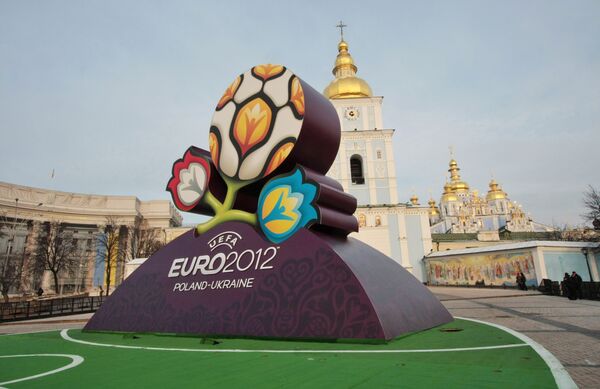 UEFA has expressed its concern over Ukraine's sluggish preparations for the 2012 European Football Championship, the head of the UEFA organizing committee in Ukraine said on Thursday.

UEFA has expressed its concern over Ukraine's sluggish preparations for the 2012 European Football Championship, the head of the UEFA organizing committee in Ukraine said on Thursday.

"UEFA believes the new [Ukrainian] government is working hard, but the implementation of preparing for the championship is continuing amid complicated and critical circumstances because much time had been lost," Markiyan Lubkivskyi was quoted as saying by the committee's press service.

It is "critically important" that the Ukrainian government demonstrates "significant progress" in preparations for the tournament in the near future, he said.

Ukraine's readiness to hold the 2012 tournament, which it is to share with Poland, has been a constant source of concern for UEFA.

Earlier, UEFA President Michel Platini warned that Ukraine could lose its right to host the championship due to the slow pace of stadium construction in the capital, Kiev, where part of the Euro 2012 matches are to take place.

Kiev is one of the four Ukrainian cities to host half of the championship's matches. Kharkov, Lvov and Donetsk are the other three. The other half of the matches will take place in the Polish capital, Warsaw, and in the cities of Poznan, Wroclaw, and Gdansk.

Besides the more rapid construction of sports facilities, UEFA has required Ukraine to improve its roads, assure sufficient accommodations for tournament guests and the proper operation of airports.

The former Soviet state's economy was badly hit by the global recession, which was aggravated in Ukraine by continuous political infighting under former President Viktor Yushchenko. Ukraine's gross domestic product fell 15%, year-on-year, in 2009, according to the country's top statistics body.

Bickering between Yushchenko and the then-prime minister, Yulia Tymoshenko, also took its toll on the Euro 2012 preparations, as the president refused to pay for infrastructure construction out of national reserves.

Viktor Yanukovych, who took over as Ukrainian president in February, has pledged to prove the country's right to host the tournament. He called for foreign investors to help Ukraine meet UEFA's demands, condemning the former government's plans to hold the tournament without attracting funds from abroad.