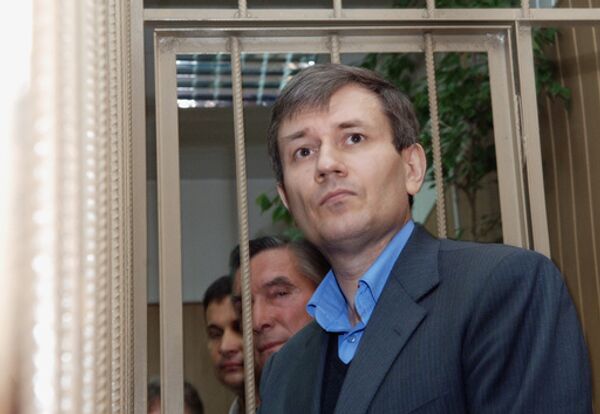 Russian "psychic healer" Grigory Grabovoi, released from jail on Friday midway through an eight-year sentence on fraud charges, will not get involved in public activities again

Russian "psychic healer" Grigory Grabovoi, released from jail on Friday midway through an eight-year sentence on fraud charges, will not get involved in public activities again, his wife said Wednesday.

"He is going to get a legal education, bring up his children, do family work and wait for his grandchildren," Yelena Grabovoi told journalists.

A statement on the website of Grabovoi's "social and political" organization - Drugg - said he would only issue statements through his lawyers, following "slanderous" media reports.

In 2005, Kazakh-born Grabovoi made headlines all over the world when he promised to resurrect the children killed as Russian forces stormed a school that had been seized by Chechen militants in the North Caucasus town of Beslan. A total of 331 people, including 186 children, died in what has been referred to as Russia's 9/11.

In May 2008 Grabovoi was arrested on fraud charges after a sting operation by a Moscow journalist. He was subsequently found guilty of 11 counts of fraudulently obtaining money "under the guise of resurrecting the victims' dead relatives or curing them of serious illnesses." He was sentenced to 11 years behind bars, later cut to eight on appeal.

Grabovoi, who once declared his intention to run for president ("my first act will be to ban death") denied all the charges, saying he had pursued political, public, religious and scientific activities in order to "benefit people".

The day before his release, Grabovoi offered his "services" in the search for miners missing after a recent accident in a Siberian coalmine. The mayor of the nearby town of Mezhdurechensk responded by saying if Grabovoi arrived "we will grab him by the scruff of the neck and chuck him out of here."