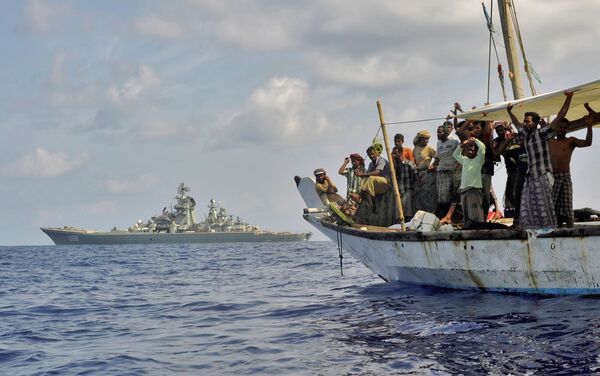 © RIA Novosti . Grigoriy Sysoyev
/
Go to the photo bank
Subscribe
The United Nations has decided to join the fight against pirates from the Horn of Africa.

The United Nations has decided to join the fight against pirates from the Horn of Africa.

At a three-day international conference held in Istanbul and co-hosted by the UN and Turkey, delegations from 55 countries and 12 international organizations agreed to establish an international agency to fight piracy. The new agency, which has not been named yet, would be used to transport pirates to places where they can be tried and punished, which will mean that the countries and private businesses will pay for the pirates' tickets, lawyers and prison sentences.

It usually takes time for the unwieldy machinery of the UN to start operating, but Secretary-General Ban Ki-moon said the organization's experts were already working to streamline international piracy laws, the results of which would soon be published. These decisions are set forth in the Istanbul declaration, which in itself is a major achievement.

Up until now, international law and national laws of most of the countries whose vessels are patrolling the waters off the coast of Somalia and the Horn of Africa had so many loopholes that it was easier to let the pirates go than bring them to justice.

The latest example of this occurred on May 5, when, after the hijacked oil tanker Moscow University was liberated by the Russian large anti-submarine ship Marshal Shaposhnikov, ten pirates were quietly put in a boat and let go to perish on the high seas. In principle, the Shaposhnikov crew acted mercifully compared to other navies: they let the pirates go, instead of hanging them on the spot.

Shortly before the Istanbul conference, Abdirasaq Adan, a representative of Somalia's Ministry of Information and Youth, said Russia has not yet asked forgiveness for its inhuman action, which would seriously affect diplomatic relations.

This was clearly an overly emotional response. Somalia's Transitional Federal Government (TFG) so far controls only a few blocks of downtown Mogadishu, the capital of the country, with the help of African Union troops.

While Istanbul was hosting the UN conference on Somalia, pirates who had hijacked a Yemeni merchant vessel in April were tried in Sana, the capital of Yemen. Six of them were sentenced to death and immediately executed (which usually means beheading in Yemen), and another six, who were not involved in the murder of two Yemeni seamen, will spend ten years in prison. Given the prison conditions in Yemen, which have not changed since the time of One Thousand and One Nights, this could be a worse fate than capital punishment.

The United States is so far the only country to try Somali pirates on its own soil. On May 19, the New York court convicted the Somali pirate who commanded the hijacking of the American container ship Maersk Alabama off the coast of Somalia last year. The sentence will be announced on October 19. The pirate is facing 34 years in prison.

Another 11 Somali pirates, accused of separate attacks on two Navy ships off the coast of Africa, are awaiting trial at the U.S. naval base in Norfolk, Virginia.

It must be said that the Americans have been acting most consistently, possibly because they have the experience and the money. The U.S. has been transporting culprits from the Persian Gulf and the Horn of Africa since Operation Desert Storm and the invasions of Afghanistan and Iraq. Moreover, the U.S. only tries pirates who attack American vessels.

The situation with the flag-of-convenience ships is much more complicated. For example, which country should try pirates that attack a vessel sailing under a Liberian flag in international waters (such as Moscow University), whose crew includes two, three or even a dozen nationalities, and whose owners are registered in Singapore, Hong Kong or London?

The EU countries have recently agreed that pirates could be tried in the countries near where they were apprehended. The EU has relevant agreements with Kenya and the Seychelles Islands, but the courts in those countries can no longer cope with the volume of cases. Kenya stopped accepting such cases this May because of the 60 cases for piracy off the Horn of Africa still pending in its courts.

All serious experts say that the fight against piracy should begin on dry land. Pirates will not stop hijacking vessels as long as Somalia is divided into a patchwork of monarchies and caliphates, without a central government.

The 1982 UN Convention on the Law of the Sea, which defines acts of piracy, must be revised to include more clear definitions, analysts say. The international community should also draft and approve a common code for punishing piracy. Leading maritime powers must be able to use clear international legislation to raid pirates' bases in coastal countries. And lastly, countries must stop paying ransom to pirates.

If the UN drafts a criminal code for pirates, this will greatly help to fight their criminal business.