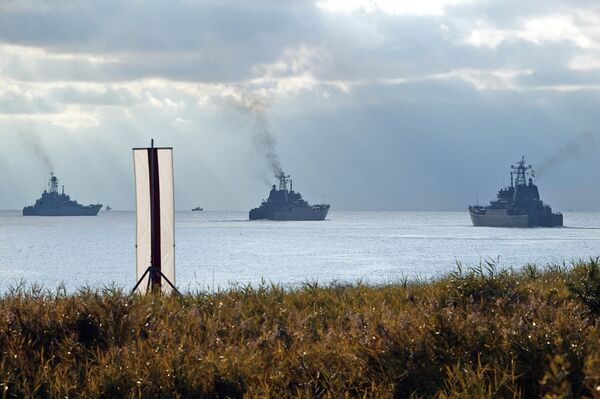 © RIA Novosti . Igor Chuprin
Subscribe
The Russian Baltic Fleet's amphibious assault landing ship RFS Kaliningrad set out on Monday for the Baltic and North seas, where it will hold military training, a spokesman for the Baltic Fleet said.

"Today, the amphibious assault landing ship Kaliningrad departed from [the Baltic Sea port of] Baltiisk. The ship set sail for the Baltic and North seas, where it will carry out a range of training military tasks, including ship-damage control and air defense training," the spokesman said.

He said the warship, considered the pride of the Baltic Fleet, will also visit the Belgian port of Zeebrugge in the North Sea during its voyage.

"A range of events intended to contribute to the strengthening of mutual understanding and cooperation between Russian and Belgian naval forces are planned to be held during the visit," the spokesman said.

The Kaliningrad entered service in December 1984 and has carried out training missions in the Baltic, North and Mediterranean seas, as well as in the Atlantic Ocean more than 10 times.

Kaliningrad class ships are capable of carrying up to 500 tons of cargo, 13 tanks and more than 200 naval infantry.