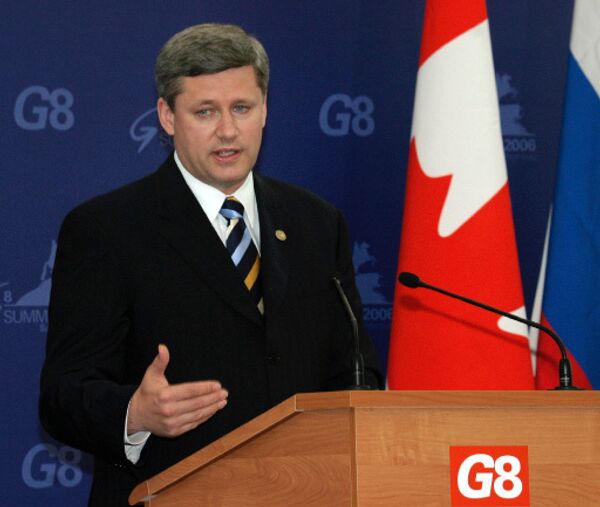 "Canada has condemned the reckless North Korean regime for this egregious violation of international law and its blatant disregard of its international obligations," Harper was quoted as saying in a statement.

The 1,200-ton Cheonan corvette sank on the night of March 26 near the disputed Northern Limit Line in the Yellow Sea after a sudden explosion, claiming the lives of 46 sailors.

A team of international investigators confirmed late last week suspicions that the ship was destroyed by a torpedo launched from a North Korean submarine.

CBC quoted the Canadian prime minister as saying sanctions would include enhanced restrictions on trade, investment and other bilateral relations with North Korea.

Besides this, high-level visits to Canada by North Korean officials will be suspended, Harper said.

He also said Canada supported South Korea's decision to respond to what President Lee Myung-bak called the "provocative acts" by the North.

The international community has condemned Pyongyang for attacking the South Korean warship. The United States said Pyongyang should face consequences and expressed its "unequivocal" support to South Korea.

UN Secretary General Ban Ki-moon has urged the Security Council to take measures "appropriate to the gravity of the situation."

North Korea has called the results of the investigation into the Yellow Sea accident "a fabrication," and warned Seoul of a stern response if the South retaliated with new sanctions against Pyongyang. The two countries remain technically at war as their 1950-1953 conflict ended only in an armistice.

Earlier on Monday South Korea froze economic relations and maritime communications with its northern neighbor. The decision is yet another blow for the North's economy already damaged by past UN sanctions intended to force Pyongyang to quit its nuclear program.