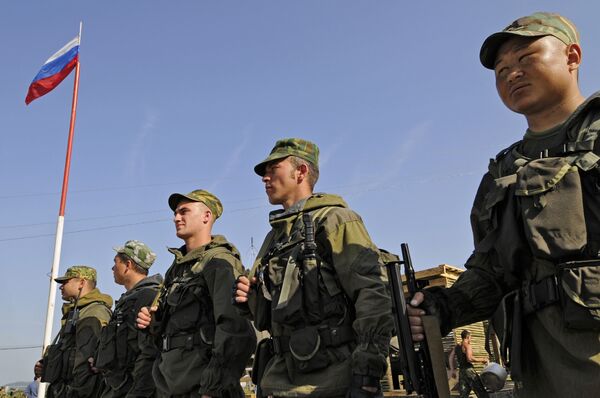 © RIA Novosti . Michail Mordasov
/
Go to the photo bank
Subscribe
The president of the former Georgian republic of Abkhazia said on Monday the number of crossing points on the border with Russia should be increased.

The president of the former Georgian republic of Abkhazia said on Monday the number of crossing points on the border with Russia should be increased.

Sergei Bagapsh said he had been receiving numerous complaints from Russian vacationers over the long lines across the border as the summer season begins.

"What is going on there now is outrageous: Women with children who want to vacation in Abkhazia have to stand in long lines for hours in the hot sun on the Russian side of the border," he said.

He also said border crossing procedure during the summer tourist season should be simplified.

The president said a meeting would be held next week with Russian Border Service and customs officials to discuss the situation.

The only border crossing between Russia and Abkhazia is in the village of Gyachrypsh, where a bridge crosses the River Psou. Bagapsh also suggested a new bridge should be built across the border river, adding that it could be built in 2011.

In early April, Russia ratified treaties with Abkhazia and another former Georgian republic of South Ossetia on joint border protection.

Under the deals, South Ossetia and Abkhazia delegate to Russia the authority to secure their borders with Georgia.

Russia recognized the independence of the former Georgian republics in August 2008 after repelling Georgia's assault on South Ossetia in a five-day war. Only Nicaragua, Venezuela and the tiny Pacific island state of Nauru have followed suit.