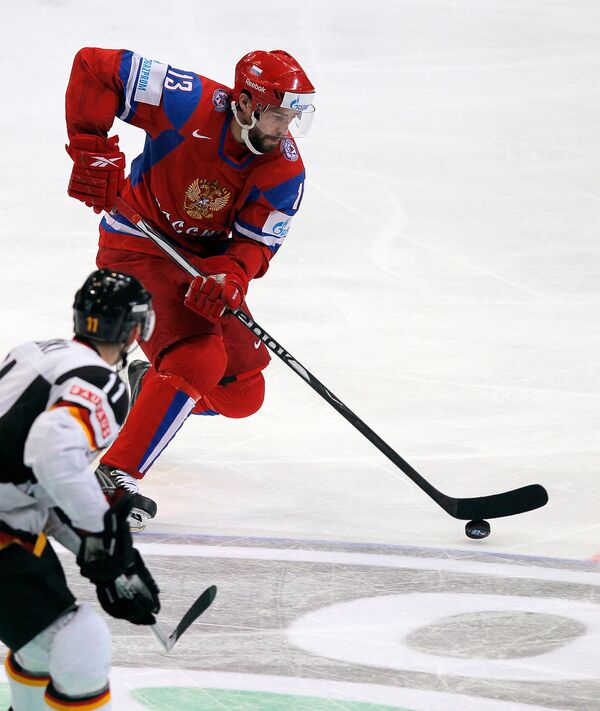 © RIA Novosti . Vitaly Belousov
/
Go to the photo bank
Subscribe
Russia's Pavel Datsyuk, who made the winning goal at the end of the third period against Germany (2:1) in the Ice Hockey World Championship semifinals, said numerous penalties in the first period disorganized the team.

Russia's Pavel Datsyuk, who made the winning goal at the end of the third period against Germany (2:1) in the Ice Hockey World Championship semifinals, said numerous penalties in the first period disorganized the team.

"The beginning of the first period was too bad. Several penalties [imposed on Russia] broke the game," said Datsyuk, whose goal at the very end of the third period took Russia to the finals against the Czech Republic.

"Then we gradually started to recover. We knew that the hosts had a good team, the qualifying round against them was very difficult," he added.

Russia, which has a winning streak of 27 games in the IIHF World Championships, could lose the game when Germany opened the score near the end of the first period. Marcel Goc made the only puck into Russia's goal in the 15th minute of play. However, Russia's Evgeni Malkin evened the score in the 31st minute.

Just under two minutes before the third period ended, Russia made its final and victorious goal.

"Our penalties were very controversial. We played against Germans on their territory and everything was possible. All [team members] received a warning," Vyacheslav Bykov said.

"In the beginning of the game we found ourselves in a very difficult situation, when the German team led 1:0. It was not easy to break through their defense," he added.

Malkin, in his turn, expressed hope that more fans will attend the finals in the German city of Cologne.

"2:1 is also a victory. Thanks to our fans, who support us here [in Cologne], in Moscow and all across Russia," he said.

Another star of the Russian team, Alexander Ovechkin, said the German team's performance "was no surprise."

"We knew they would play in a defensive style. They scored a goal while playing five against three. It was important for us to revenge that goal, and we did it," he said.

"Luck smiled on us in the third period. We were confident. We just had to score that goal," he went on.