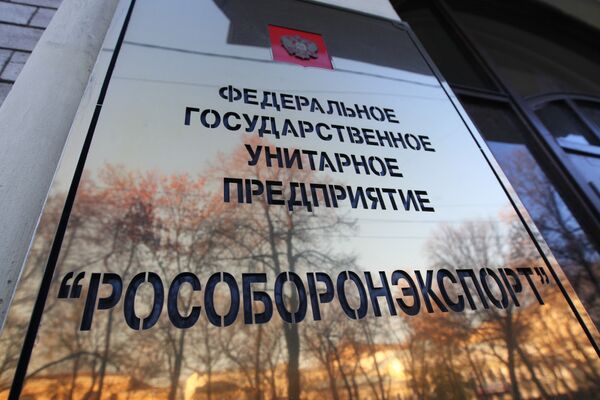 The U.S. has lifted sanctions against Russia's state arms exporter Rosoboronexport and two Russian universities imposed over alleged violations of the nuclear non-proliferation regime, the U.S. Federal Register has said on its website.

In October 2008, the George W. Bush administration imposed economic sanctions on Rosoboronexport and other firms in connection with the alleged proliferation of weapons of mass destruction and sensitive missile technologies to Iran, North Korea and Syria.

Mendeleev University of Chemical Technology and Moscow Aviation Institute have been under sanctions since 1999 over the same allegations.

Moscow has denied all allegations and decried the move as "unfair competition and an attempt to cut off suppliers."

The sanctions bar any U.S. aid, contracts or arms sales to blacklisted firms.

"A determination has been made to terminate sanctions imposed on Rosoboronexport (ROE) pursuant to Section 3 of the Iran, North Korea, and Syria Nonproliferation Act," a statement on the Federal Register's website said.

Sanctions against the Russian universities were lifted as their activities were found to correspond to U.S. political and security interests.

U.S. Department of State official spokesman Philip Crowley rejected on Friday the allegations that the decision to lift the sanctions was taken by Washington in an attempt to encourage Russia to support a resolution imposing new sanctions on Iran, which is being drawn up by the UN Security Council.

"We felt that as Russia shared our concern about Iran and was willing to support the kinds of arms restrictions that are in the draft (UN) resolution, we felt confident that we could remove these penalties while protecting our non-proliferation interests," Crowley told journalists in Washington.

"Actions are connected in the sense that clearly the actions Russia has taken over time have demonstrated that they take the situation with Iran seriously," he said.

The decision to lift sanctions against Russian firms was taken by the Obama administration on May 12 and came into force on May 21.

On April 8, Russian President Dmitry Medvedev and his U.S. counterpart Barack Obama signed in Prague a new strategic arms reduction treaty replacing the 1991 pact that expired in December. The agreement is still to be ratified by the two country's parliaments.

On May 10, Obama resubmitted a Russia-U.S civilian nuclear cooperation deal to the U.S. Congress for approval. The agreement, which allows the exchange of nuclear technologies between the two countries, was first submitted two years ago by the Bush administration but was withdrawn after the Russia-Georgia war over South Ossetia in August 2008.