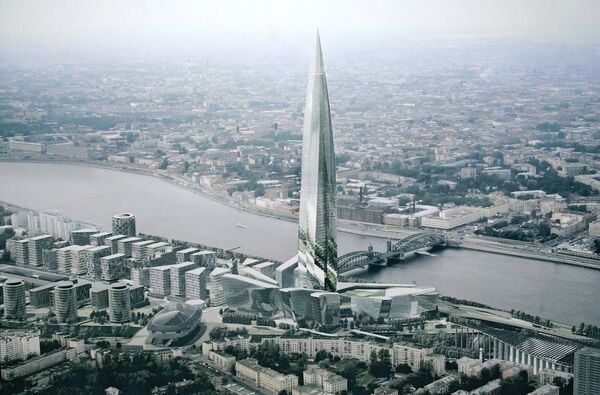 The authorities of Russia's second-largest city approved in September 2009 the construction of the Okhta business center by the oil arm of Russian energy giant Gazprom, within the territory of St. Petersburg's UNESCO World Heritage site. Under a 2001 law, buildings in the area cannot be higher than 40 meters.

Director of UNESCO's World Heritage Centre Francesco Bandarin has urged representatives of the project to find alternatives for the design of the tower.

Kommersant said Medvedev expressed his support for UNESCO's suggestion in a letter to the Russian Culture Ministry's heritage protection unit.

"The president gave us strict instructions to ensure compliance with Russia's international obligations, outlined in the UNESCO Convention," head of the unit Alexander Kibovsky said on Thursday at an interregional meeting in the southern Russian city of Kislovodsk.

"This fully corresponds with our rejection of the violation of legislation on the protection of monuments, regardless of the views of regional authorities."

St. Petersburg Governor Valentina Matviyenko said in 2009 the city authorities have ruled that if the Okhta business center is to be built, it will not be subject to height restrictions.

According to Kommersant, Matvienko said in July 2009 that St. Petersburg had gained nothing from UNESCO and the organization was just "a pretty bow on the body of St. Petersburg."

The heritage protection unit said it hoped Medvedev's suggestions will make Matvienko change her mind about the construction of the tower.

Residents of St. Petersburg have protested the building of the tower on several occasions.