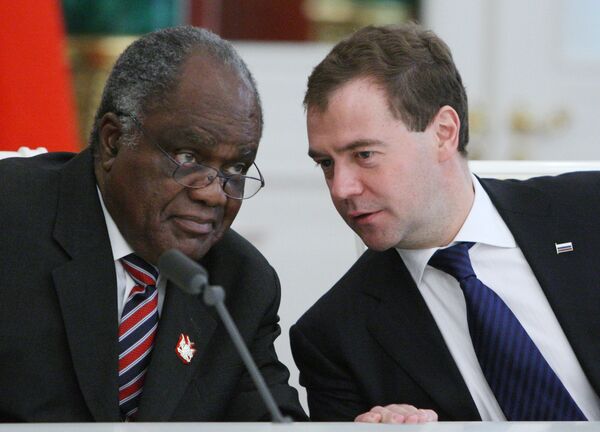 Rossing is a large open pit uranium mine, in the South-West Africa. It started operations in 1976.

Earlier on Thursday, Russian President Dmitry Medvedev and his Namibian counterpart, who is in Moscow on an official visit, signed a memorandum on cooperation in exploration and development of Namibian uranium deposits.

The document lays out opportunities for joint ventures in exploration, development and processing of uranium ore as well as uranium enrichment. The memorandum is effective for five years and may be automatically prolonged.

"We are ready to guarantee investments," Kiriyenko said, adding that Russia planned to buy into Namibian uranium deposits this year. He said the money would be invested in the full-fledged development of the deposits, production and manpower training.

A Turkish nuclear power station that will be built with Russian expertise under a deal signed last week may be one of buyers of the Namibian uranium, Kiriyenko revealed.

Russia and Namibia will also cooperate in implementing new technologies in geological exploration and development of uranium deposits.

Rosatom and the Namibian Ministry of Mines will create a joint task group to include Russia's Atomredmetzoloto and Namibian Epangelo Mining Ltd.