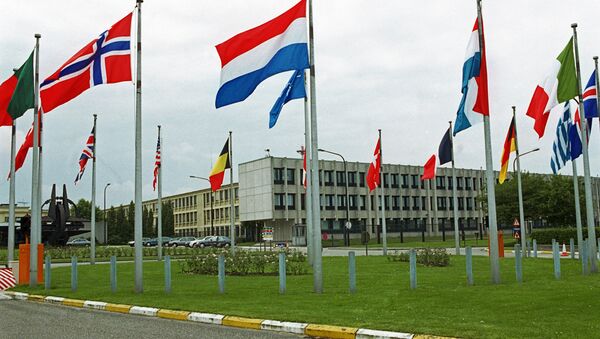 NATO comes out with a new strategic concept once every ten years, like a child that outgrows its old clothes and needs new ones.

NATO comes out with a new strategic concept once every ten years, like a child that outgrows its old clothes and needs new ones. The great paradox of these regular changes is that NATO's original "zone of hostility" has been shrinking geographically over the past 20 years while its zone of activity has continued to expand. In fact, all of NATO's past concepts simply provided a formal rationale for what it had been doing for a few years anyway, even if this extended beyond NATO's official competence.

But that is beside the point, really. Sometimes military alliances do have to adapt to volatile times in ways their founders could not have envisioned. However, one needs to distinguish between a single deviation from the mission and a consistent policy of expanding one's authority.

NATO is certainly the latter case. The "wise men" led by former U.S. Secretary of State Madeleine Albright have recently released their recommendations for NATO's strategic goals for the next decade. The report will have to be considered by the 28 member governments and approved at the Lisbon summit in November. The 2010 Strategic Concept will replace the 1999 concept.

The report, titled "NATO 2020: Assured Security: Dynamic Engagement", recommends that NATO engage dynamically with countries and organizations that are outside the Euro-Atlantic region, which it has been doing de facto for the past 20 years. There is also a proposal to incorporate NATO forces into the larger UN military structure, allowing NATO to conduct operations all over the world, possibly in partnership with other countries (Russia, China). But any potential partnership will clearly be tilted toward NATO leadership.

There has been speculation that Albright's recommendations would move NATO in that very direction ever since her team of a dozen military and civilian experts from the private and public sectors began its work last summer. The only question was to what extent NATO's transformation into a global military and political organization (in spite of its Charter) would be institutionalized. The answer, we now know, is: to a large extent.

Over the past decade, Europeans have come to view NATO as an anachronism badly in need of modernization. Yet no one seriously proposed disbanding the alliance, with the exception, perhaps, of some lefty revolutionary hotheads. NATO is so deeply entrenched in Europe's economy that uprooting it would inevitably come with social and economic consequences, such as increased unemployment. Not even Russia would make such an absurd (for the time being) demand. But there is a big difference between not actively opposing NATO and supporting its globalization.

Documents like Albright's usually do not recommend fundamental changes, as they are authored by seasoned diplomats, military experts, politicians, academics, advisors and other brains.

Ever since 1951, the alliance has always looked to its best and brightest to resolve problems that conventional diplomacy could not.

NATO has been trying to justify its existence in a world that has changed dramatically over the past 20 years. With the disintegration of the Warsaw Pact, NATO's opponent and reason for existing, most Warsaw Pact members became NATO members. Now, without its communist counterpart, NATO is finding it difficult to come up with a political rationale for the existence of its colossal war machine. Russia certainly remained a threat to Europe during the turmoil of the 1990s, but a threat that required an international police force, at most. NATO could not accept such a downgraded status.

Therefore, Albright's group was given the difficult task of creating a new political and ideological rationale for NATO's existence. NATO's new concept must be a kind of seal of approval for the 21st century, proving that the alliance is essential for the global security framework.

That is why the document contains provisions on the expansion of NATO's political and military roles, the boundaries of its activity, its methods and means and completely new functions. Under the new concept, NATO's primary objectives would be to improve the global non-proliferation regime, cut nuclear arsenals, fight terrorism, build a missile-defense shield in Europe, and combat maritime piracy and cyber-attacks. Other objectives include ensuring energy security, preventing global warming and protecting water sources and other natural resources. These do not sound like the objectives of a military alliance.

The concept also proposes creating a NATO liaison department at the UN. In addition, NATO would assume responsibility for providing military support for the UN's civilian operations.

The concept includes an entire paragraph on Russia. It does not include much in the way of new ideas, except for a call to strengthen cooperation within the NATO-Russia Council, which has been inadequate to date. Russia is no longer seen as an enemy, but at the same time NATO does not want partnership with Russia to limit its ability to protect its members.

The only truly new idea is bad news for Ukraine and Georgia - or perhaps just Georgia, as Ukraine's new government is unlikely to seek NATO membership. One of the clauses contains a curious phrase, which could be interpreted in a variety of ways, none of which can be very good for prospective members. "In addition, NATO's diplomatic efforts with Russia, Ukraine, Georgia and the other countries of the Caucasus, and other nonmember states, show that nations do not have to be part of the Alliance to join with NATO on projects that benefit all."

Officially, the concept reiterates that NATO is a voluntary alliance with an open-door policy.

It is extremely tempting to venture into that "open door" to challenge NATO's new concept. If global security is NATO's primary concern, then all the problems besetting NATO-Russia relations could be solved in an instant. All Moscow needs to do is file for membership. Our individual problems and concerns would be transformed into shared problems and concerns. Nikita Khrushchev suggested this as a joke in 1954. He nearly filed an application. Why not try again?