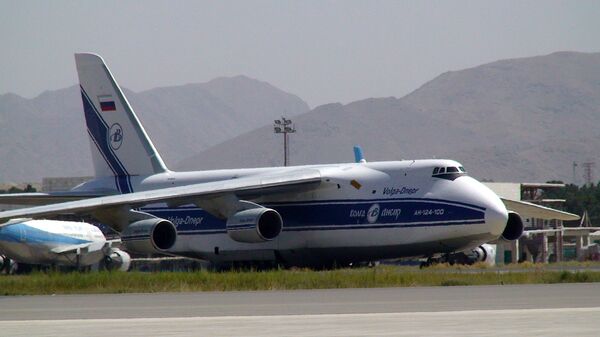 The United States is considering a Russian proposal on the joint production of An-124 Condor heavy-lift transport aircraft, a Russian deputy prime minister said

The United States is considering a Russian proposal on the joint production of An-124 Condor heavy-lift transport aircraft, a Russian deputy prime minister said.

The An-124 was designed by the Antonov Design Bureau in 1982, and was produced in Ukraine's Kiev and Russia's Ulyanovsk plants until 1995. Although there are no An-124s being built at present, Russia and Ukraine have reportedly agreed to resume production in the future.

"We have discussed a full-scale project, which includes the joint production of the plane, setting up a joint venture, shared rights, sales to Russian and American customers - both civilian and military - and the creation of a scheme for post-production servicing," Sergei Ivanov told reporters in Washington.

The An-124 is similar to the American Lockheed C-5 Galaxy, but has a 25% larger payload.

An-124s have been used extensively by several U.S. companies. Russian cargo company Volga-Dnepr has contracts with Boeing to ship outsize aircraft components to its Everett plant.

United Launch Alliance contracts the An-124 to transport the Atlas V launch vehicle from its facilities near Denver to Cape Canaveral.

Space Systems Loral contracts the An-124 to transport satellites from Palo Alto in California to the Arianespace spaceport in Kourou, French Guiana.

According to Ivanov, the Pentagon has contracted An-124 planes for military transport purposes until 2016.

"The An-124 planes, made during the Soviet era, have been used extensively in the interests of U.S. customers. We are offering a full-scale project, rather than a simple lease," Ivanov said.

Russia plans to manufacture a total of 20 An-124 aircraft by 2020 in accordance with the state arms procurement program.