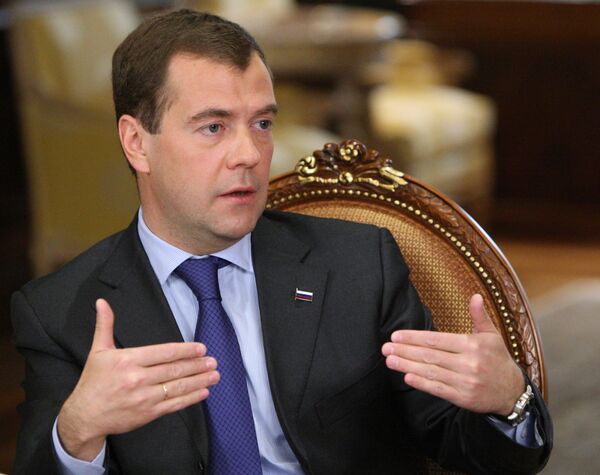 © POOL
/
Go to the photo bank
Subscribe
Russian President Dmitry Medvedev said Russia and Ukraine are improving relations, which were deteriorated during the rule of Ukraine's former president Viktor Yushchenko.

Russian President Dmitry Medvedev said Russia and Ukraine are improving relations, which were deteriorated during the rule of Ukraine's former president Viktor Yushchenko.

Medvedev is due in Ukraine on May 17 for his second visit since Viktor Yanukovych was elected president in February. The Ukrainian president has twice visited Russia as the two former Soviet neighbors have restore their relations over the past three months.

Medvedev, answering a question whether Moscow tries to involve Kiev more into its geopolitical influence, said that there were no bilateral relations between the countries with the Ukrainian ex-president.

"What sort of Ukraine's involvement into anything?" he said. "There were no relations. I refused to send an ambassador because the relations were, basically, reduced to zero."

"Business contacts were frozen," he continued. "Yes, of course, gas and oil were supplied. We can not avoid it as that was our contractual obligations. But if we talk about full-fledged relationship, they were simply collapsed."

"That is why only now we are developing them."

Russian Prime Minister Vladimir Putin first put forward the idea of a Gazprom-Naftogaz merger at the end of April, after Moscow and Kiev agreed an extension to Russia's lease on a key naval base in Ukraine in exchange for discounted prices for Russian gas. The Russian government's press service later said Moscow was not proposing a takeover but the creation of a new company.

The merger proposal came just days after Russia and Ukraine signed a landmark agreement to extend Russia's use of the Black Sea Fleet's main base in the Crimean port of Sevastopol for 25 years beyond its original 2017 expiration. In return, Ukraine received an immediate discount on Russian natural gas.

The gas-for-fleet deal was severely criticized by the Ukrainian opposition which staged protests inside and outside of the Ukrainian parliament during the ratification of the deal.

The Ukrainian opposition considers the presence of the Russian Navy in Crimea a threat to the country's national sovereignty and integrity. A larger part of the Ukrainian population considers the extension of the lease a catalyst for mutually beneficial cooperation between Kiev and Moscow.