One killed during clashes in southern Kyrgyz city (WRAPUP) 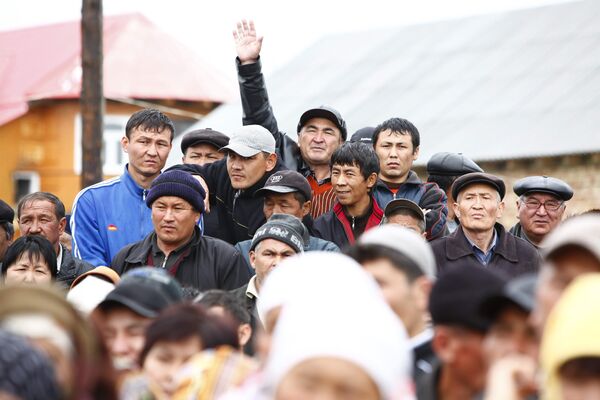 One person was killed on Friday during clashes between supporters of deposed President Kurmanbek Bakiyev and backers of the interim government in the south of the Central Asian state of Kyrgyzstan, the country's health ministry said

One person was killed on Friday during clashes between supporters of deposed President Kurmanbek Bakiyev and backers of the interim government in the south of the Central Asian state of Kyrgyzstan, the country's health ministry said.

The clashes, in which 43 people were injured, took place in the town of Jalal-Abad. Earlier an interim government source claimed that three people had been killed.

Shots were fired into the air during the clashes and there have been reports that Bakiyev's supporters are armed with a grenade launcher.

The situation in Kyrgyzstan, where a bloody uprising led to the overthrow of the government in early April, worsened on Thursday when administrative buildings in three southern regions - Bakiyev's former power base - were stormed by his supporters.

The Kyrgyz interim government gathered on Friday for an emergency meeting.

Kyrgyz news agency 24.kg quoted the Jalal-Abad district hospital senior medical officer, Abdy Shamshiyev as saying that after the clashes the hospital received 28 injured people. Among them were those who had gunshot wounds and blunt injuries.

Shamshiyev told 24.kg that the hospital had all necessary staff to treat the injured.

The interim government said the rally was "an attempt by Bakiyev's supporters to gain revenge and destabilize the country".

The Osh regional administration said the interim government had broken up a protest rally the southern Kyrgyz city of Osh.

The statement said the backers of incumbent authorities earlier freed the administrative building, but the protesters refused to leave the square in front of the administration.

Kyrgyz security forces arrived in Osh and blocked all entrances to the administrative building.

Kyrgyz officials say the situation in the town is calm and being monitored by interim government authorities.

The head of the post-Soviet security group, Collective Security Treaty Organization (CSTO), Nikolai Bordyuzha said on Friday that the organizations members agreed it was reasonable the help "the existing authority" in Kyrgyzstan, effectively throwing their weight behind the interim Kyrgyz government in its stand-off with pro-Bakiyev rebels.

The post-Soviet security bloc, which held an informal summit in Moscow on May 8, adopted a joint statement, pledging its readiness to provide assistance to Kyrgyzstan and promote "constructive cooperation with other countries and international organizations along these lines."

However, Bordyuzha said the CSTO would not interfere with internal Kyrgyz affairs.

"Proceeding from this [non-interference], the non-use of any force or CSTO's capabilities is, naturally, justified in resolving the domestic problems of the Kyrgyz republic," Bordyuzha said.

Belarus is one of the CSTO members along with Armenia, Kazakhstan, Kyrgyzstan, Russia, Uzbekistan and Tajikistan.

"Almost everybody expressed their support of Belarusian president [Alexander Lukashenko] saying he behaved nobly and like a man by assisting Bakiyev himself and his closest relatives," Bordyuzha said.

Answering the question over Belarusian position towards Bakiyev, Bordyuzha said he did not think Belarus had some kind of peculiar position.

According to the secretary general, Lukashenko's decision will not affect the CSTO's attitude to Belarus.

Earlier Kyrgyz authorities formally requested the Belarusian Prosecutor General's Office to extradite Bakiyev. An official said the request was under consideration, but a Belarusian Foreign Ministry spokesman suggested it would not be resolved quickly.