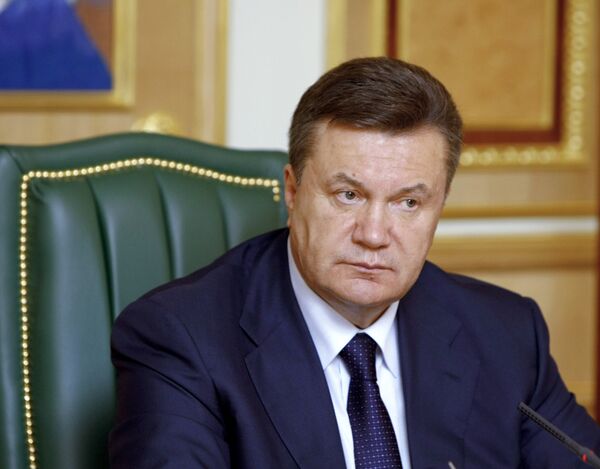 The South Stream pipeline will pump 63 billion cubic meters of Russian natural gas annually to Bulgaria, Italy and Austria and is part of Russia's efforts to cut dependence on transit nations, particularly Ukraine and Turkey.

"If it is a means of putting pressure on Ukraine, then we understand it. If it is a competitive struggle, then we are ready for it," Yanukovych told Ekho Moskvy radio station.

He added that his country was ready to cooperate with Russia and the European Union on modernizing Ukraine's gas transit system, estimated to cost about $500-600 million.

Russian energy minister Sergei Shmatko said on Tuesday Russia considered South Stream to be "an issue of principle" and "a strategic entry to direct supplies for European buyers."

He also said that the possible merger of the Russian energy giant Gazprom and Ukraine's Naftogaz, proposed in late April by Russian Prime Minister Vladimir Putin, had no bearing on the South Stream project.

The Ukrainian leader said on Friday the merger should be carried out on a parity basis.

"If I had been there [at a meeting between Putin and his Ukrainian counterpart Mykola Azarov, during which the proposal was first voiced], I would have extended my hand to Putin [for a handshake] and said: I agree [for] the fifty-fifty [basis]," Yanukovych told Ekho Moskvy.

Talks on the merger began on Thursday, at a meeting between Gazprom CEO Alexei Miller and Ukrainian Fuel and Energy Minister Yuriy Boiko.

"The merger of the two companies will be an important component of increasing Europe's energy security, together with the diversification of gas routes to Europe," the gzt.ru news portal quoted Miller as saying. "In this respect, our South Stream construction plans remain unchanged."

Gzt.ru quoted Mikhail Korchemkin, director of Pennsylvania-based consulting firm East European Gas Analysis as saying that the deal was unlikely, because if the Russian energy giant goes ahead with its South Stream project, the merger will be to Naftogaz's disadvantage.

"Yanukovych hopes that Moscow is bluffing while speaking of its commitment to the South Stream project, but that is not true - South Stream is lucrative for Gazprom," Korchemkin said.