Moscow set to resume its influence with Damascus 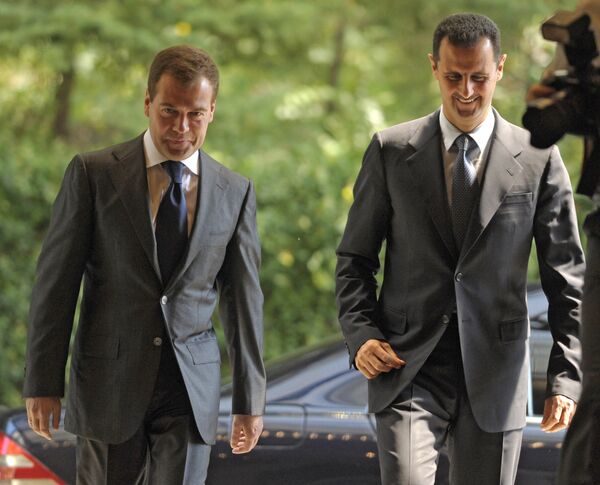 © RIA Novosti . Sergey Guneev
/
Go to the photo bank
Subscribe
Russian President Dmitry Medvedev is to pay an official visit to Syria on May 11 for the first time in the history of bilateral relations.

Russian President Dmitry Medvedev is to pay an official visit to Syria on May 11 for the first time in the history of bilateral relations.

Syria, which was the Soviet Union's main strategic ally in the Middle East throughout the 1970s and the 1980s, was simply dropped out of the list of Moscow's foreign policy priorities in the early 1990s.

Damascus perceived the break-up of the U.S.S.R., along with Moscow's decision to renounce global confrontation with Washington and the restoration of Russian-Israeli diplomatic relations in 1991, as a betrayal of the Arab world's interests and as a global Zionist conspiracy.

Damascus believed this 19 years ago, and many Syrians still think the same way. However, the most pragmatic members of the Syrian political elite headed by President Bashar al-Assad have always aspired to have business and military cooperation with Moscow and have counted on Russia's political support on the Middle East peace settlement. Syria's main demand within this peace process is for the return of the Golan Heights, occupied by Israel during the Six-Day War in 1967.

The ice in Russian-Syrian relations in the 1990s began to thaw in January 2005, after Bashar al-Assad paid his first visit to Moscow, which resulted in Russian then-President Vladimir Putin writing off 73% of Syria's former Soviet debts ($9.8 billion) in exchange for new guaranteed Russian weapons contracts.

Russia currently delivers MiG-29 Fulcrum fighters, Strelets launch units accommodating short-range surface-to-air missiles of the Igla (SA-18 Grouse) man-portable air defense system (MANPADS), and medium-range Pantsir-S1 (SA-22 Greyhound) and Buk-M2 (SA-17 Grizzly) SAMs to Syria. Although Damascus would like to receive S-300PMU Favorit (SA-20 Gargoyle) long-range SAMs and Iskander (SS-26 Stone) mobile theater-level missiles, Moscow refuses to supply them because it does not want to upset the regional military balance and to sour relations with Israel and the United States. The Kremlin is also unlikely to agree this time, but Medvedev and al-Assad will undoubtedly discuss SAM contracts.

Another issue within the framework of military cooperation between the two countries is a small naval supply and maintenance base located in Syria's city of Tartus, which had accommodated Soviet warships in the 1980s. In the past 30 years, the base's infrastructure has fallen into disrepair, and Damascus is unable to finance its modernization. Russia is ready to invest in its expansion and thus create a full-fledged naval base for its ships.

Russian-Syrian bilateral trade has almost doubled over the past five years, reaching $1 billion in 2009. Apart from the Russian military, oil and gas companies and other businesses are also interested in the Syrian market. A month ago, Russia's oil and gas company Tatneft and its Syrian partners started developing the South Kishma oilfield in the province of Deir ez-Zor.

In December 2009, Stroytransgaz, the oil and gas engineering and construction company, built and commissioned a large gas refinery near the city of Hims, located 160 km from Damascus.

Naturally, Medvedev and al-Assad will prioritize economic and military cooperation issues. At the same time, Damascus would like to secure Russia's political backing.

As has already been said, al-Assad's main objective is to enlist Moscow's political support on the issue of returning the strategic Golan Heights, a plateau 60 km long and 25 km wide, from which the Syrian capital can be clearly seen. The highest value is, however, attached to the main local resource, which is water, rather than land. It is here that Lake Kinneret is located, also known as the Sea of Tiberias, which is the main freshwater reservoir in Israel.

As part of an effort to return the Golan Heights, President al-Assad initiated indirect Turkish-mediated Syrian-Israeli talks two years ago, but they produced no results as the government of Benjamin Netanyahu, which replaced the Ehud Olmert cabinet in 2009, steadfastly opposes the return of the Golan Heights.

Against this backdrop, Al-Assad hopes that Russia, an active member of the Quartet on the Middle East, also comprising the United Nations, the United States and the European Union, will be able to reinstate the Israeli-Syrian track of the Arab-Israeli peace talks, even though possibly only through Ankara's mediation.

Important in this context is that, in addition to Syria, President Medvedev also plans to visit Turkey on May 11-12, where he most likely will negotiate the Syrian issue with national leaders.

Russian and Syrian leaders are also likely to discuss the issue of convening a Moscow conference on the Middle East, in an attempt at bringing the conflicting parties, namely, Lebanon, Syria, possibly Iran, the Palestinian National Authority and Israel, to the negotiating table.

In any case, given the tough confrontation between the Fatah and Hamas movements and in view of the current Israeli political climate, the Moscow conference can only be held in the long-term.

Moscow will not agree to host a conference just for the sake of hosting a conference as it does not seem to be willing to make a fool of itself, as U.S. President George W. Bush did in Annapolis in 2007.