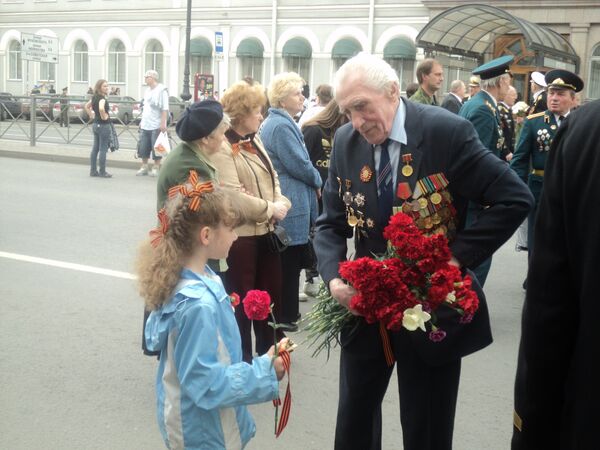 Viktor Biryukov said more than 20,000 police officers and Interior Ministry troops ensured law and order on the streets during some 200 mass events.

Victory Day marks the final defeat of Nazi Germany by the Soviet Union in World War II. This year, the 65th anniversary of the Soviet victory was marked by bigger celebrations than ever before.

The display began at 22:00 Moscow time (18:00 GMT.) The fireworks were set off from 16 locations around the city, two more than last year.

Russian President Dmitry Medvedev said during festivities on Sunday that he was convinced the celebrations would unite Russian people even more.

Speaking at a festive concert, Medvedev said the Great Patriotic War (the way WWII is called in Russia) was a hard trial for the nation but "this war forged our national character."

The Russian leader also thanked veterans. "Had it not been for their terrible and hard fate, we would simply not exist," he said.

On Sunday morning in Moscow, at 10:00 Moscow time (06:00 GMT), a military parade involving over 10,000 personnel, 150 tracked and wheeled military vehicles, and 127 aircraft and helicopters was launched on Red Square.

After the parade, the foreign veterans laid flowers to the Tomb of the Unknown Soldier in the Alexander Garden near the Kremlin and attended a number of other events.