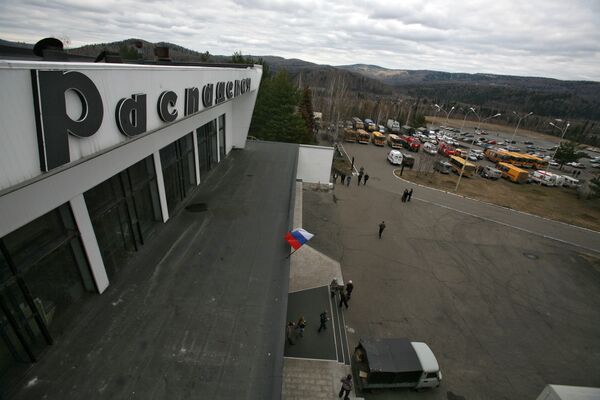 © RIA Novosti . Alexei Efimov
/
Go to the photo bank
Subscribe
Residents of the West Siberian town of Mezhdurechensk have said the explosions in the nearby Raspadskaya coal mine, which left at least 12 dead, 59 injured and over 80 trapped, have affected everyone in the town.

Residents of the West Siberian town of Mezhdurechensk have said the explosions in the nearby Raspadskaya coal mine, which left at least 12 dead, 59 injured and over 80 trapped, have affected everyone in the town.

The two blasts occurred in the space of four hours late on Saturday and early on Sunday. A total of 64 workers were trapped after the first blast and 20 rescue workers went missing after the second.

"In our town, everyone is connected in some way to the coal mining business. Either they work in the mines themselves or someone close to them does. The Raspadskaya tragedy has affected everyone," a resident said.

The population of the town and adjacent villages is around 80,000. The vast majority of residents work for one of three coal mining companies: Mezhdurechye, Southern Kuzbass and Raspadskaya.

"Residents are calling each other to confirm the latest news about the disaster, checking lists of injured for names of friends and family. The disaster has been a real shock for everyone."

Shortly after the second blast the rescue operation was suspended amid fears of further explosions. Emergencies Minister Sergey Shoigu said the operation would resume "within the next few hours."

"There is always a chance of recovery. In Rostov region we recovered people alive after seven days," Shoygu told the victim's relatives, referring to a similar incident in the south of Russia.

He says ventilation work is still underway as methane levels in the shaft are still high.

"Now we need to do everything possible to prevent a further blast," he said.