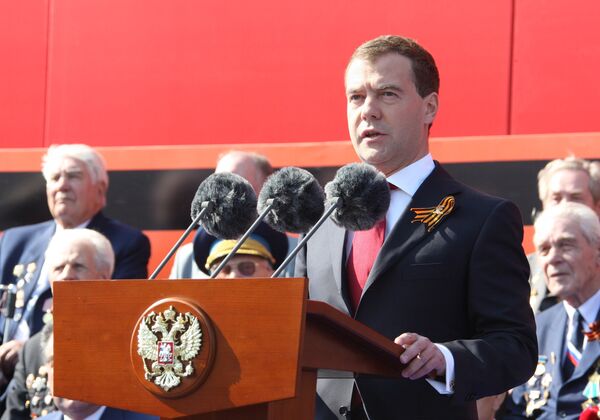 Medvedev addressed the guests of an official reception at the Kremlin dedicated to the celebrations of the 65th anniversary of the Allied victory in the World War II, which is referred to in Russia as the Great Patriotic War.

"The Great Victory teaches us to preserve peace...The duty of the modern generation is to prevent new global conflicts and apply all possible efforts to make good-heartedness, cooperation, and good neighborliness the only possible foundation of relations between countries," the Russian president said.

The reception was attended by 21 foreign leaders, including Chinese President Hu Jintao, German Chancellor Angela Merkel and the heads of state of almost all the ex-Soviet nations.

Medvedev expressed gratitude to WWII veterans for their heroism and enormous effort that preserved the freedom and the sovereignty of the Russian people.

Russia paid a tragic toll for its contribution to the victory over Nazi Germany.

According to latest studies, the total causalities of the Soviet Union, both soldiers and civilians, were 26.6 million people, of those an estimated 8,668,400 soldiers died.